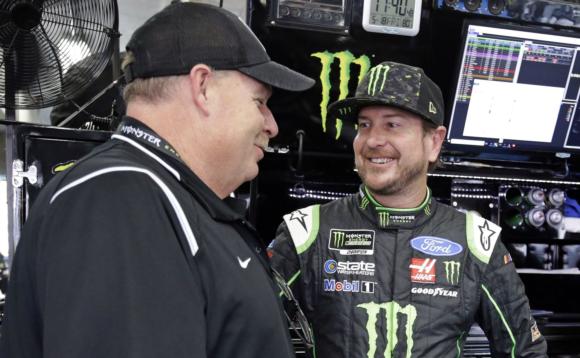 Kurt and Kyle Busch are one of only two pairs of brothers to win the Monster Energy NASCAR All-Star Race at Charlotte Motor Speedway. Like the rest of this year’s star-studded field, the two Busches will attempt to tackle a new aerodynamics package and – for the first time in Charlotte’s illustrious history – a restrictor plate on the cars when Saturday’s showcase of speed and strategy roars to life.

Kurt Busch – the most recent driver to sweep the All-Star Race and the Coca-Cola 600 in 2010 – said he’s anticipated this year’s 80-lap all-star tilt more than any other edition of which he’s been a part since his rookie year in 2001.

“Whether it’s the pre-race show, the Open or the Monster Energy NASCAR All-Star Race, there’s so much to see, absorb and feel that’s different than normal race weekends,” Busch said. “I think it’s about staying loose, having fun with it and putting yourself in position to win it. Winning it in 2010, that’s when we had a 10-lap run to the finish (like this year).

“This is the most excited I’ve been to get out on track with a new rules package in a long time, just because of the preparation going into this car and the amount of questions, team meetings, texts and calls. … Everything from shocks, transmission, ratios to aerodynamic balances, this weekend feels like a blend of superspeedway action, short track action and 1.5-mile action. It’s really unique. We’re wide open all across the track.”

Kyle Busch, the defending race winner and the driver of the No. 18 M&Ms Red Nose Day Toyota, said the unpredictability gives the race a different dynamic

“I think it’s just all about the money on the line,” the younger Busch said. “This week, it’s sort of an exhibition race. It’s a completely different rules package and we don’t know how the race is going to unfold. You still have your stages. Other than that it’s just about going out there and getting that million dollars. Bring home a check, or bring home a steering wheel.