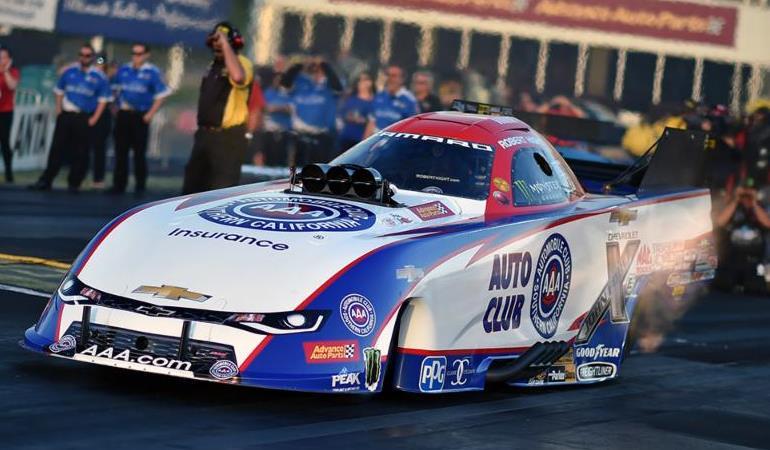 As two-time and reigning Funny Car world champion Robert Hight continues to grind for his first win of the season, his Auto Club of Southern California Chevrolet Camaro SS Funny Car continues to be one of the fastest hot rods on the circuit. Hight and his Auto Club team will continue that high-performance trend this weekend at the Menards NHRA Heartland Nationals at Heartland Park Topeka.
Currently sixth in points, Hight has set low ET and speed at the NHRA Gatornationals in Gainesville, Fla. and NHRA SpringNationals outside of Houston as well as top speed at the season-opening NHRA Winternationals in Pomona, Calif. and the most recent event, the NHRA Southern Nationals outside of Atlanta. The veteran driver’s stellar speed and times should come as no surprise, Hight owns both ends of the NHRA Funny Car national records with a 3.793-second pass, the first 3.7 run in Funny Car history, from the Lucas Oil Nationals in Brainerd, Minn. in 2017 and a 339.87 mph run from the Sonoma Nationals in Sonoma Calif. also in 2017.
“This Auto Club Chevrolet Camaro has really come around this season,” said Hight. “(Crew chief) Jimmy Prock and Chris Cunningham are working really well together and I have a lot of confidence. We just need to string four great rounds together on Sunday. We have been quick in qualifying and we have even started race day with a great race car. We need to just stay focused and do what we know how to do.”
So far this season the president of John Force Racing also has two runner-up finishes and a No. 1 qualifier to his credit. The 41-time Funny Car winner was edged out in the final round of the season opening Winternationals and a few weeks ago at the Spring Nationals in Houston Hight raced to the final round from the No. 1 qualifier spot only to be narrowly defeated by J.R. Todd.
Heartland Park Topeka has been good to Hight in his 13-year career. He has started race day as the No. 1 qualifier four times and has qualified inside the top-10 12 out of 13 times and has had at least a semifinal finish eight of those years. His two wins at the facility came back to back in 2010 and 2011.
“This is a track with a lot of history. When I won in 2010 it was my third win in a row that season. I would love to get a win streak started this season and this would be a great place to pick up the first win,” said Hight. The competition is so tough now you have to do everything right all weekend. You need to make a great run in the first qualifying session or you are behind the eight ball all weekend. You want to be back of the pack for Friday night so you can get aggressive and run low. There is a lot of strategy.”
Qualifying at the Menards NHRA Heartland Park Nationals begins Friday with sessions at 4 p.m. and 7 p.m. and continues Saturday with an additional two sessions at 2 p.m. and 5 p.m. Eliminations will begin Sunday at 11 a.m. and you’ll be able to catch the action live on FOX Sports 1 (FS1) beginning at 2 p.m. ET.
John Force Racing PR