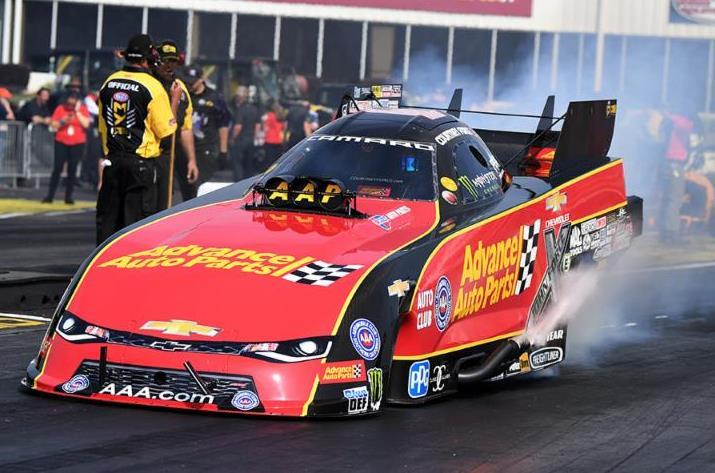 Courtney Force is heading to the Menards NHRA Heartland Nationals at Heartland Park Topeka in Topeka, Kan. with momentum, confidence and history on her side.
The winningest female Funny Car driver in NHRA history is coming out of three back-to-back races with two consecutive No. 1 qualifiers at the NHRA Four-Wide Nationals in Charlotte and the NHRA Southern Nationals at Atlanta Dragway. She capped things off by bringing home the Wally at the Southern Nationals. With the win, she also took over the NHRA Mello Yello Funny Car points lead for the first time since 2016.
“It is still early in the season but we have the points lead right now and we moved up from second. We want to consistently hold on to that top spot for a while. I am sure it will bounce around because there are so many good teams out here. It feels good because we have a great race car, a great team and we are looking to the end of the season,” said Force after the Atlanta win. “We are hoping we have the car and the team to get it done and end up with that championship at the end of the season.”
The driver of the Advance Auto Parts Chevrolet Camaro SS Funny Car already has two wins and four No. 1 qualifiers in the 2018 season bringing her tally to career total 20 No. 1 qualifiers and 10 victories. Her 10th victory came on the 10th anniversary of the first win for women in Funny Car, an accomplishment made by her older sister, Ashley Force Hood.
“It was pretty cool and I didn’t realize it was the ten-year anniversary that weekend,” said Force. “I grew up watching Ashley and to see everything she has accomplished in the Funny Car category is great. She has been a mentor and I have always looked up to her. She has always been there to give me advice or anything I needed from my rookie season until now. It has been great to have her support and Brittany’s support. They are my best friends. It will be cool to be in the winner’s circle with her.”
The Heartland Nationals have been good to Force, she has qualified top five at four out of six appearances at the event including doubling up with sister Brittany Force in 2014, a feat the pair have repeated twice more including the 2018 Charlotte four-wide race. Courtney Force went on to win the 2014 Heartland Nationals, it was the 100th NHRA national event victory by a woman. This season, when she fires up and stages her 11,000-horsepower hot rod, it will be her 150th career Funny Car start.
“I have had a lot of success with this Advance Auto Parts team and my Chevrolet Camaro Funny Car. Working with Dan Hood and Brian Corradi has been great this season and we have a consistent race car that is winning rounds. I want to keep up that momentum this weekend in Topeka,” Force said. “I have a lot of great memories from this track. We won the 100th race by a professional female and Brittany and I have been No. 1 qualifier together. I would love to win this race with her this weekend but I know there is a lot of tough competition out there. We will have to be at our best.”
Qualifying at the Menards NHRA Heartland Park Nationals begins Friday with sessions at 4 p.m. and 7 p.m. and continues Saturday with an additional two sessions at 2 p.m. and 5 p.m. Eliminations will begin Sunday at 11 a.m. and you’ll be able to catch the action live on FOX Sports 1 (FS1) beginning at 2 p.m. ET.
John Force Racing PR
Post Views: 171