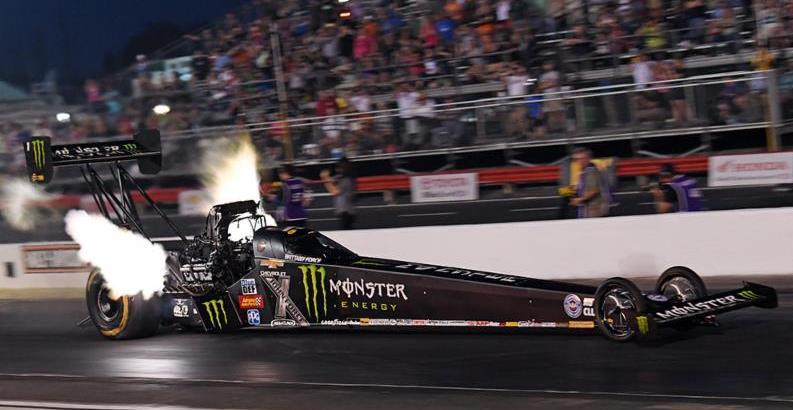 Top Fuel reigning world champion Brittany Force is setting her sights on her second win of the season this weekend at the Menards NHRA Heartland Nationals at Heartland Park Topeka in Topeka, Kan.
The eight-time event winner is confident in herself, her team and her Monster Energy dragster as they’ve built some momentum after a rough start to the season. After her extreme crash at the NHRA Mello Yello Drag Racing Series opening event, Force needed only two races to get back in the swing of things and dominate the Top Fuel qualifying.
Just two races after the accident that landed Force in the hospital, she qualified third at the NGK Spark Plugs NHRA Four-Wide Nationals in Las Vegas. Two weeks later, she qualified second at the NHRA Spring Nationals in Houston and went on to win for her first victory of the season. At the Charlotte Four-Wide Nationals, Force was the No. 1 qualifier alongside her sister Courtney Force and at the most recent event at Atlanta Dragway, the NHRA Southern Nationals, Brittany qualified second and raced to the quarterfinals.
“We had a brand-new dragster to start the season and it was destroyed in Pomona,” said Force. “My guys pulled another race car together for Houston and we went out and won that race. This Monster Energy team is amazing and I love driving this Top Fuel dragster. We have been No. 1 qualifier with this dragster and I know we can make some awesome runs in Topeka this weekend.”
Seventh in points, and steadily climbing, Force will be looking for more of that qualifying dominance and race day consistency heading to Heartland Park Topeka. She’ll have history on her side too. She’s qualified in the top six four out five times including two No. 1 qualifiers. In 2016, Force blasted to what was the Top Fuel national elapsed time record with an astounding 3.676 second run. In addition, Force and her Monster Energy team hold the track speed record from their 333.66 mph race day pass in 2017.
“Topeka is always a track we are excited to go to. We have set track records there and Courtney and I have made a little bit of our own history there. We are excited to get back to Topeka and see what this Monster Energy team can do. We have been running well with this new car and that track is always ready for some fast times.”
Qualifying at the Menards NHRA Heartland Park Nationals begins Friday with sessions at 4 p.m. and 7 p.m. and continues Saturday with an additional two sessions at 2 p.m. and 5 p.m. Eliminations will begin Sunday at 11 a.m. and you’ll be able to catch the action live on FOX Sports 1 (FS1) beginning at 2 p.m. ET.
John Force Racing PR
Post Views: 208