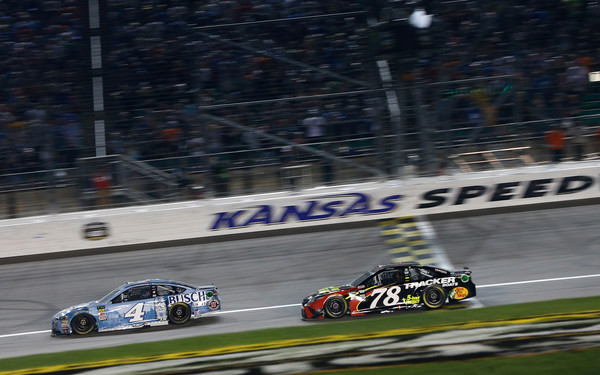 Martin Truex Jr. nearly pulled off an incredible comeback but fell short of scoring his third-straight victory at Kansas Speedway.
The Furniture Row Racing driver, who took the lead on Lap 253 of 267, got passed with two to go by Kevin Harvick, who went on to beat Truex to the checkered flag by 0.390 seconds.
The runner-up finish was Truex’s seventh top five in the first 12 races and he moved up one spot in the driver standings to eighth.
To even be in position for the win was a remarkable accomplishment for the reigning NASCAR Cup champion. His No. 78 5-hour ENERGY/Bass Pro Shops Toyota struggled with handling issues for the majority of the race, which was evident by his finishes of 11th in the first stage and 10th in the second.
But with a number of adjustments, the No. 78 came to life late in the race at the 1.5-mile oval.
Following the last caution and holding down first place, Truex did not pit for fresh rubber. He fired off a great restart to maintain the lead but was unable to hold off Harvick in the closing laps.
“I thought we were going to be alright there,” Truex said. “Like three or four to go, my car just got real tight and chattered the right front off of turn four, and I was like, ‘Oh boy, that’s not good.’ We had been so tight all night and I didn’t know where to go once he was getting there. If I go to the top, he’s just going to catch me on the bottom. I might as well run where I feel I can run the fastest, and I did and it just wasn’t enough. It’s been a fun night, we definitely overachieved, so that’s always good.
“Good strategy calls by Cole (Pearn, crew chief) and overall, just a hell of an effort by everybody on our team. We had to fight hard. We struggled a bit all weekend and we were awful at the start of the race. We’re missing something right now, just can’t get the thing turned, it felt tight all night long. The car was better for sure the last three or four runs of the race. We’ll get to work on that. Thanks to everybody back in Denver and everybody at TRD (Toyota Racing Development), Bass Pro, 5-hour ENERGY, Auto Owners Insurance and my friends from Garmin are here tonight, hope they had a good time, wish I could have got to victory lane for them.”
Following Harvick and Truex to the checkered flag were: Joey Logano, Kyle Larson, Denny Hamlin, Paul Menard, Erik Jones, Kurt Busch, Aric Almirola and Kyle Busch.
The race had six cautions for 31 laps and one red flag for 13 minutes. There were 13 lead changes among seven drivers.
The NASCAR Cup Series circuit heads to Charlotte for the All-Star Race Saturday May 19 and the Coca-Cola 600 Sunday May 27.
FRR PR/Photo Brian Lawdermilk/Getty Images
Post Views: 164