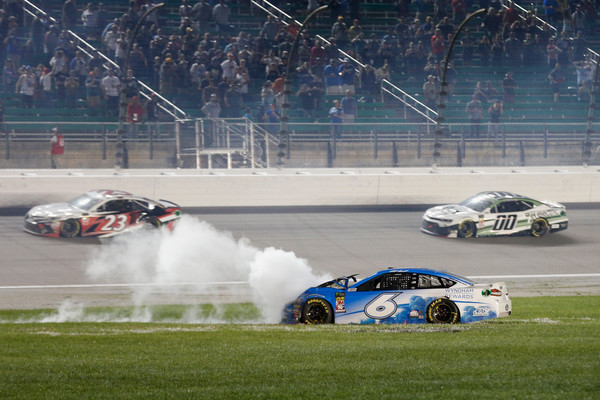 NASCAR Champion Matt Kenseth made his return to Roush Fenway Racing at Kansas Speedway – the site of his last win with the organization in 2012. However, his debut in the famed No. 6 car was spoiled after his Wyndham Rewards Ford was collected in a multi-car accident late in the race with the team forced to settle for a 36th-place finish.

“I don’t have any idea what happened with the wreck,” Kenseth said. “I just saw everybody wrecking and the track was kind of blocked, so I tried to get down towards the grass. This grass is not the new friendly grass with the rain and all it just kind of dug in and then I just hit the car in front of me.

“I just want to thank Wyndham Rewards, Jack (Roush) and everyone here at Roush Fenway,” added Kenseth. “It was a tough start, but we will keep working to get better each week.”

After missing qualifying alongside five other cars on Friday due to delays in inspection, the Cambridge, Wisconsin, native started from the 35th position. Kenseth steadily worked his way up to 28th place before the competition yellow was displayed on lap 30 for overnight rain. Despite battling an ill-handling Ford, Kenseth was able to pick up three more positions when the green-checkered waved at the end of stage one with the veteran in 25th position.

In their first weekend together on the No. 6, the duo of Kenseth and Crew Chief Matt Puccia continued to work with the car and make the needed adjustments to the Wyndham Rewards Ford. A caution-free stage two caused a long green flag run and Kenseth took the green-checkered in the 26th position.

The race looked to go green the rest of the way until a flurry of cautions came in the closing laps. With 14 to go, a multi-car accident occurred in front of Kenseth, and with nowhere to go, ended his 2018 debut early.

“It was a really tough weekend all around,” Kenseth added. “We obviously have some work to do. The good news is it will get better. We’ll keep working on what we need to do to improve the car and we’ll come back next week and look to build on what we were able to learn here this weekend.”

Kenseth and the No. 6 Ford returns to the track next weekend at Charlotte Motor Speedway for the 2018 All-Star Race, with Kenseth behind the wheel.

This will be Kenseth’s 18th consecutive All-Star race; the longest streak of any current driver.