Menard Steers His Way To Sixth-Place Finish At Kansas 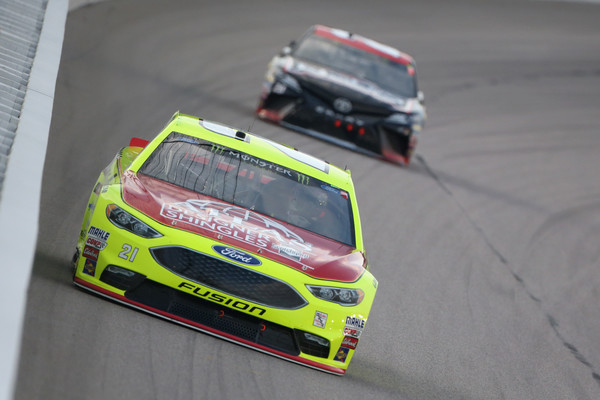 Paul Menard and the No. 21 Menards/Atlas team put a couple of disappointing weekends in the rear-view mirror on Saturday night at Kansas Speedway. The team rebounded in a big way by qualifying among the top 12 and coming away with a sixth-place finish in the KC Masterpiece 400.

The entire race weekend played out drama-free for the team, just as Menard hoped it would.

“It was just an uneventful race and a solid weekend,” he said in his post-race comments. “We had good preparation with the car, good [pit] stops, good adjustments.”

“It was kind of a boring weekend, which is good.”

Menard started 11thand was never far from the top 10 throughout the 400-mile race. He and his team, led by crew chief Greg Erwin, were able to improve their Menards/Atlas Fusion throughout the night, with adjustments on pit stops making the No. 21 Fusion faster after each pit stop.

Saturday’s race ran most of the distance without a caution flag for a wreck, but with 14 laps remaining, a multi-car crash unfolded just in front of Menard, who steered low and avoided damage.

After a 13-minute red-flag period, racing resumed and Menard drove from eighth place to sixth at the checkered flag.

“We made some good adjustments coming into [Saturday night] and kept working on it all night long,” Menard said. “The track changed a lot as the sun went down. We kind of saved our best for last, I guess.”

“We had a couple cars crash in front of us. We avoided it, and the further up you can restart the better you can stay up there and the more likely you are to stay up there, so clean air was everything.”

Eddie Wood said he was glad to have a good run on a day in which sponsor Atlas was well-represented at the track.

“We had a huge group at hospitality before the race and really enjoyed meeting everybody from Atlas,” Wood said. “And they were with us in the pits for the race, so it made having a good race and a good finish even more special.”

His 31 points earned at Kansas allowed him to move up three positions in the standings to 18thplace heading into the All-Star Weekend at Charlotte Motor Speedway.