LaJoie Secures 24th in Schluter-Systems No. 72 at Kansas Speedway 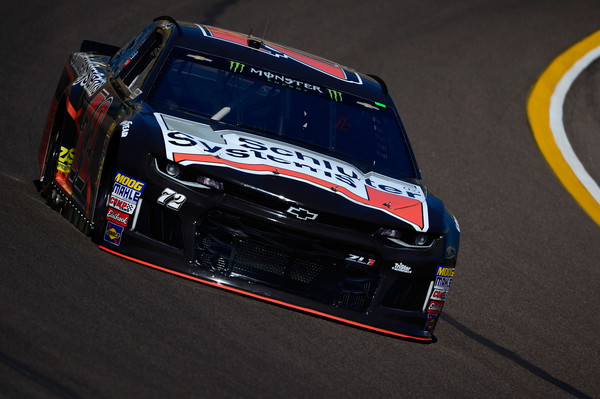 Stage 1
Corey LaJoie rolled off the grid in the 27th position in the Schluter-Systems No. 72 Chevrolet Camaro ZL1 at Kansas Speedway to start the KC Masterpiece 400
Competition Caution Lap 30: Running 32nd, LaJoie relayed the No. 72 was loose in as well as the center and tight on exit. He pitted for four tires, fuel and a wedge adjustment. He restarted 33rd
Lap 50: LaJoie had fallen a lap down from the leader and reported he was loose in and tight on the throttle which resulted in falling two laps down from the leader by lap 58
Stage 1 Completion Caution (Lap 80): LaJoie was posted 31st, two laps down. Crew Chief Frank Kerr called for LaJoie to pit for four tires, fuel and another wedge adjustment
Stage 2
LaJoie took the Stage 2 green flag restart 26th, two laps down
Lap 119: LaJoie continued to experience the same conditions. He radioed he needed more front turn late in the corner without giving up security
Lap 125: Under green flag, LaJoie came to pit for four tires, fuel and air pressure adjustment. He cycled back to the field 31st, three laps down
Stage 2 Completion Caution Lap 160: LaJoie completed the stage 31st, four laps down. He stated he had nothing to lean on, left rear was sliding periodically and had lost left rear lateral. He pitted for four tires, fuel, chassis and air pressure adjustments to the Schluter-Systems No. 72
Stage 3
LaJoie was scored 31st, four laps down for the start of Stage 3
Lap 213: Battling a loose condition, LaJoie had fallen to five laps down. Crew Chief Frank Kerr called LaJoie to pit under green flag for four tires, fuel, air pressure and wedge adjustments; posting him as 32nd, six laps down returning to the field
Caution Lap 238 (incident): Running 31st, six laps down, LaJoie stayed out to take the wave around and gain track positon.
Caution Lap 249 (incident): The pit crew serviced the No. 72 with four tires, fuel and air pressure adjustment
Caution Lap 254 (incident with multiple drivers): NASCAR halted the field and displayed the red flag in an effort to clear and clean the track surface. LaJoie assumed the 26th position when the field resumed competition

LaJoie continued to battle and ultimately secured a 24th place finish in the Schluter-Systems No. 72 at Kansas Speedway.