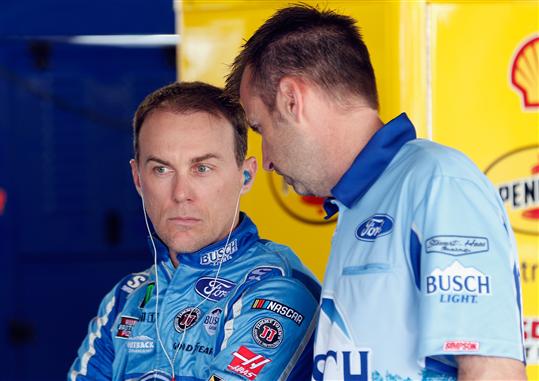 KEVIN HARVICK, No. 4 Busch Light Beer Ford Fusion – “This has been a really good race track for us through the years and I think obviously when you look at qualifying day it’s also been just one of those places that kind of fits what we do.  So it’s been an entertaining day.  We’ve had a lot of things of things to work through today, but I think today is one of those days when you look at the team and you’re like, ‘Man, those guys are really good at what they do.’  Nobody panics and really shows the experience and just patience that all those guys have that they’ve gained and learned and I think you look at the experience of the team and it seems to keep getting better, so that’s fun to be a part of.”

ARE YOU GOING TO GIVE ANYBODY ELSE A CHANCE THIS WEEKEND?  “I hope not.  I have no plans to.”

CAN YOU EXPAND ON WHY THIS TRACK JIVES WITH WHAT YOU DO?  “I have no idea, but it just seems to work.  When you come here as a group we look at this race track and just say, hey, we expect to qualify well.  We expect to race well just because of the past results and the way that it kind of fits everything that we do.  I wish I could tell you more than that, but it’s just one of those places that just works for us.”

WHEN THE CAR IS IN INSPECTION DO YOU HAVE ANY NERVES?  WHAT GOES THROUGH YOUR HEAD? “It’s kind of like the weather – I don’t have any control of it and I try to just think about what I’m doing.  Those guys are doing everything they can do to get the most out of the race car and that’s what I want them to do.  Sometimes it’s too much and sometimes you get through and sometimes you don’t, but they do a really good job of managing the system and when I speak of the experience of the team I think that’s another piece that they do – they do a lot of things really, really well, but managing things is something that I feel like they’re really good at, so, for me, I just sit back and let them do their jobs.  If we miss qualifying and start from the back, that’s just one of those days that didn’t all work out and it’s really nothing that I can control.”

WHAT ARE SOME THINGS THAT WILL CHANGE AS THE RACE GOES ON TOMORROW?  “There’s definitely going to be a swing in the race track and even if it didn’t go from day to night, I mean obviously that’s just a temperature change in the surface of the race track and the ambient temperature as well, but I think when you look at this race track in general it really widens out. I think as you saw in practice a lot of guys running fast at the end of practice were running up in the higher groove, where the rubber is not burned in yet, so it’ll depend on how much the trucks run up the race track tonight and how much they get cleaned off and how much they use that top lane as to what happens in the first half of the race because it’ll definitely go through a transition in the first half of the race as the lanes move up against the wall.  It’s a racy race track and you have to keep track of the balance change throughout the night as it goes from day to night and also keep up with the ever-changing race track as the groove moves up to the wall.”

RYAN BLANEY, No. 12 REV Group Ford Fusion – “I thought our car today was pretty decent and I thought we found a little bit of speed for qualifying, which was nice.  This has been a good track for us over the past handful of years and hopefully we can just find a little bit more to end up in Victory Lane.  It’s gonna be hard to beat that car who has been beating everybody this year, but we’ll see if we can get a little bit better, but I’m really proud of this team.  They’ve been working their butts off to try and get us better and better each week and try to get up there to where we can compete for wins on a regular basis.  I think we’re getting closer, it’s just a matter of closing that gap and trying to close one out.”

IS IT DEMORALIZING AT ALL TO SEE HARVICK DO THIS WEEK AFTER WEEK?  THEY HAVE A LOT OF SPEED NOW.  “Yeah, they do.  I wouldn’t really say it’s demoralizing.  They put in a bunch of effort and their cars are really fast.  We have work to do to catch up and it’s not for a lack of effort on our side.  They’re busting their tails like I said to try to get to where they are and try to compete with them.  It’s no joke that he’s head and shoulders better than everyone else right now and that whole organization is really great right now, but that 4 car is super-strong and it almost makes you kind of fight harder not only as a driver, but as a team as well and especially since they’re the same manufacturer as you.  I think all of the Fords are great right now, but they’re a little bit ahead of everybody.  That has definitely made everyone hungry to try to get to where he is and personally as a driver you want to kind of try to get better and better to get to where he’s at as well.”

IS THIS ONE OF THE TRACKS YOU FEEL MOST COMFORTABLE AT?  “Yeah, I think this is a really good track for our team.  I’ve liked this track.  I made my first Cup start here back in 2014, so it’s been a really nice race track for me.  I enjoy it.  A big, fast mile-and-a-half and really wide.  You can kind of go in any lane and it has just kind of suited my driving style and how the team likes to come prepared for the race, so qualifying has been big here.  We were able to sit on the pole for this race last year and sitting on the front row again this year it’s nice to start up front.  Our race car seems to be pretty fast too when we get going on Saturday night and it’s just something that I think meshes well between the race track and my team and myself. We run well here, but we need to close one out.  We need to try to get in Victory Lane here.  I think we’re close, but we just need that little bit more.”

PENALITES ON WEDNESDAY HAVE BEEN AN ONGOING ISSUE.  DO YOU HAVE A TAKE ON IF NASCAR SHOULD DO ANYTHING ABOUT THAT?  “I think if you break the rules, you’re gonna get penalized.  The reason why they do it on Wednesdays is it takes some time to get those cars back to the R&D Center and inspect them and then they figure out what they’re going to do.  If I had to change anything about it, there’s bigger news other than that, I feel like personally than penalties.  I feel like whenever you’re promoting penalties it doesn’t look good for anybody, not the team, not the sport.  I think you can hand out penalties, and you need to, but just keep it under wraps.  You don’t have to make a big deal out of it just say, ‘OK, you failed this, this, this,’ and whatever comes of it does.  But I don’t know.  I think it gets blown out a lot, but that’s just the way it is.  I do think there is a little bit more important things going on than always doing the penalty thing, but that’s not my call.”

ARIC ALMIROLA, No. 10 Smithfield Prime Ford Fusion – “I’m just really proud of everybody at SHR for bringing such fast race cars to the track every weekend.  This is the first weekend that we’ve done a good job of executing all day on Friday. Our practice went really smooth.  The car had speed in race trim.  We swapped over to qualifying trim and had good speed and kind of maintained that all the way through qualifying through each round and that’s the first time we’ve actually done that.  I’m just really proud of Johnny and all the guys on this 10 team, and our Smithfield Prime Ford Fusion is ready for Primetime tomorrow night.”

BRAD KESELOWSKi, No. 2 Alliance Truck Parts Ford Fusion – “We made some little gains there on the last run, so that’s nice.  Of course, you want to be on the pole, but that’s not bad.”

CLINT BOWYER, No. 14 Haas Automation/VF1 Ford Fusion – HOW DO YOU FEEL NOT BEING ABLE TO GET OUT AND QUALIFY IN FRONT OF YOUR HOME CROWD?  “I guess Matt Kenseth’s big debut being in the 6 car not getting out on the race track probably isn’t very good either, but me being at home that’s a pretty good story.  No, we’re stuck back there in jail.  I don’t know.  I have a pretty bad taste in my mouth right now.  It’s hard not to go off because it’s frustrating.  I mean, you sit there and watch the guys.  The body was off.  They made some adjustments and went back through and then the chassis is off.  I watched and they didn’t even jack it up.  They didn’t even do anything.  They just pushed it back in here and pushed it back over there, the body was good and then the chassis is off.  It’s just super-frustrating to be able to not get on the track. We were fifth-quick in practice and everybody’s got a job to do.  NASCAR has a job to do and it’s hard.  It’s difficult to regulate and govern, the sanctioning body, and everybody on a fair, level playing field, but I don’t think this is the answer either.  This doesn’t look very good.”