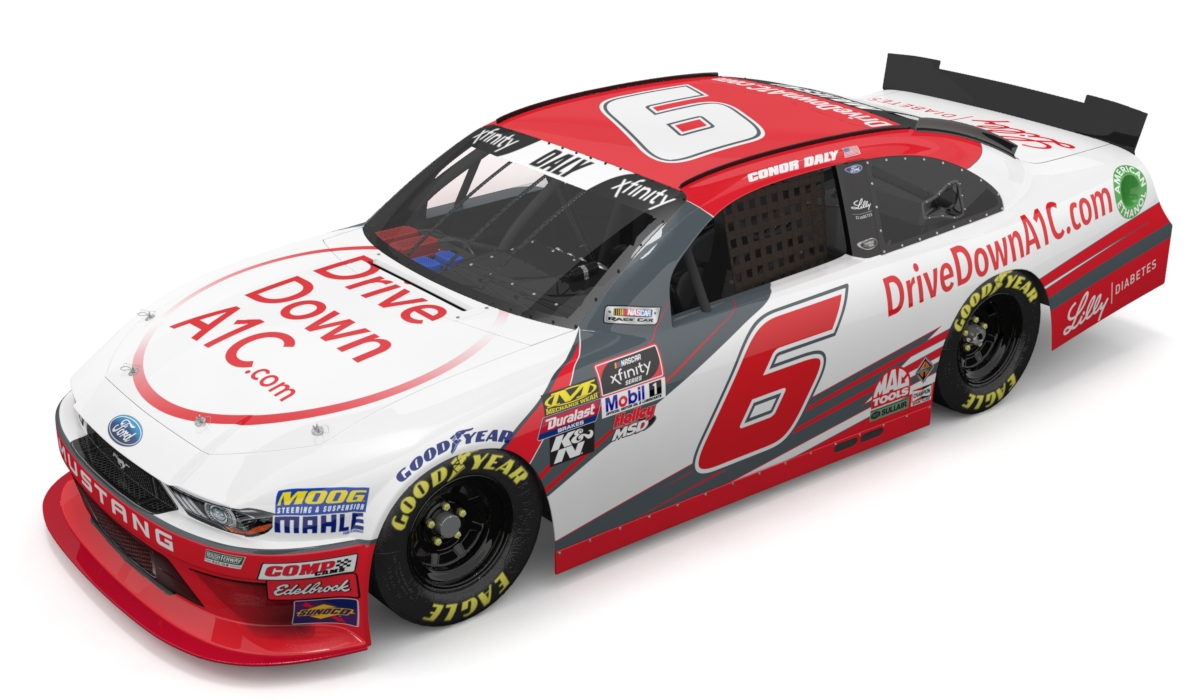 Roush Fenway Racing will field three Lilly Diabetes Ford Mustangs at Road America for the NASCAR Xfinity race on Saturday, August 25th.  Lilly Diabetes Drive Down A1C driver Ryan Reed will be joined by Wisconsin hometown driver Ty Majeski in the No. 60 and IndyCar driver Conor Daly will round out the trio behind the wheel of the No. 6.  Daly, like Reed, competes at the highest levels of racing while managing his Type 1 diabetes. The Xfinity race at Road America will be his NASCAR debut.  Majeski also has a close tie to the diabetes community as his grandfather has Type 2 diabetes.

“Lilly Diabetes has done so much for me and I’m excited to have them represented in full force at Road America,” said Reed.  “Conor and I have been friends for a while and this is awesome that we’ll get to compete together as teammates.  I can’t wait to see him behind the wheel of one of our Xfinity cars.”

Reed is competing in his fifth full season behind of the No. 16 Lilly Diabetes Ford for Roush Fenway Racing and over his career to date has two wins, six top-five and 20 top-10 finishes.  Reed was told he would never race again, after being diagnosed with Type 1 diabetes at the age of 17. However, through hard work, perseverance and working closely with his doctors, Reed has been able to manage his diabetes and set an example for others.

Daly, like Reed, has never let diabetes hold him back from achieving his dreams.  Daly was diagnosed when he was 14 years old and took on the diagnosis like a challenge, working his way to the top.  Daly will compete in the 2018 Indianapolis 500 with Lilly support and with his fellow Type 1 Road America teammate Ryan Reed at-track cheering for him. Conor will be the first and only person with type 1 diabetes to race in both NASCAR and IndyCar in the same year.

“I’m very excited for this opportunity to be partnered again with Lilly Diabetes and to be able to drive a Jack Roush Ford,” said Daly.  “I’ve raced at Road America almost every year since I was 16 and have won there.  I have driven almost every form of car, but this will be my first stock car experience.  I’ve been an avid follower of NASCAR and have been friends with Ryan for a long time and been to many races to support him.”

Ty Majeski will also represent Lilly Diabetes on track at Road America in the No. 60.  He has witnessed firsthand the impact of diabetes and has watched his grandfather deal with Type 2 diabetes for many years. Thirty million people in the US live with diabetes.

“Road America is my hometown track and one of the places I’m really looking forward to racing this year,” said Majeski.  “Lilly Diabetes does so much for the racing community and Roush Fenway, and I can’t wait to represent them.  My grandfather has Type 2 diabetes so I’ve seen firsthand the ups and downs that those with diabetes must endure and know that Lilly stands behind the entire community.”