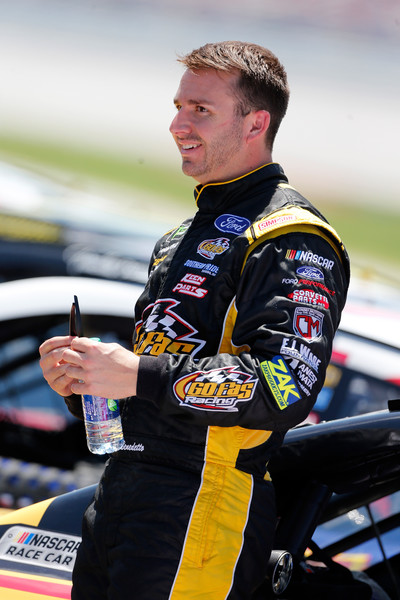 Matt DiBenedetto is well on his way to have his best season ever in the Monster Energy NASCAR Cup Series. With an average starting position of 28th and an average finishing position of 24th, he’s bettered his career average by nearly four spots so far this year from his previous averages of 32nd and 29th respectively. He’ll hope to continue to push that direction as he takes the green flag with the No.32 Can-Am / Wholeys Ford this Saturday night in the Monster Energy NASCAR Cup Series KC Masterpiece 400 at Kansas Speedway.

The Only Way is Up:
A third of the way through the 2018 season, DiBenedetto sits 31st in the Monster Energy NASCAR Cup Series. He’s separated by 60 points back to 32nd place and only separated by 11 points to all the way up to 27th place. Kansas Speedway will be the site of the 12th race of the season for DiBenedetto and the Can-Am team, and the team hopes their strong 1.5-mile program will help them move up the standings.
Since hiring Crew Chief Randy Cox, Go Fas and DiBenedetto have finished 22nd and 16th in two 1.5-mile starts. With two 1.5-mile tracks back-to-back in Kansas and Charlotte, that success could help the No.32 Can-Am / Wholeys team continue to move forward.
Last Week for the No.32 Team:
Last weekend the CorvetteParts.net team was in Dover, Delaware for a 400 mile race at the 1-mile oval. DiBenedetto and Crew Chief Randy Cox qualified well, into the second round of qualifying and earned themselves a 24th place starting spot for the green flag on Sunday.
Early into the race, DiBenedetto felt a vibration and brought the CorvetteParts.net No.32 into the pits and to the attention of the pit crew. The team discovered that a wheel had been cracked while on track, a problem that if left undiagnosed, could have destroyed the racecar. The unscheduled pit stop coupled with a pit road penalty put the team down several laps, a hill that was to tall for the team to climb as the race went on. The team was still able to bring home a 29th place finish, keeping them in the tight points race.
DiBenedetto said, “it was a tough race for sure, but it shows the hard work and perseverance of our CorvetteParts.net team that we were able to salvage a 29th place finish after our issues. Thank you to Tom and TJ from CorvetteParts.net for their support of our race team as always!”
DiBenedetto on Kansas Speedway:
“Kansas [Speedway] has aged really well. It’s such a fun track to have long runs at because the groove opens up from the bottom all the way to the top. I’ve had some really good cars there in the past with my old Crew Chief Gene Nead, and Randy has given me incredible 1.5-mile race cars so far. We might have had a bit of a down week luck-wise last week, but we’re confident we can bounce-back this weekend. I always look forward to coming to Kansas and this week should be a good one for us.”
Matt DiBenedetto Career Monster Energy NASCAR Cup Series Stats at Kansas Speedway:
Starts: 6
Average Start: 28.8
Average Finish: 27.17
Best Finish: 22nd (2017)
GFR PR/Photo  Brian Lawdermilk/Getty Images