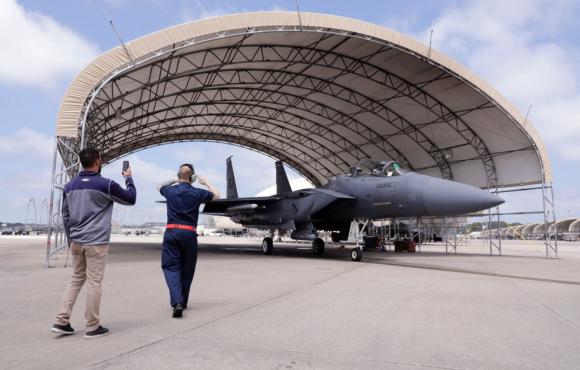 Prior to Bubba Wallace driving the No. 43 U.S. Air Force Chevrolet in the Coca-Cola 600 on May 27 at Charlotte Motor Speedway, Wallace visited Seymour Johnson Air Force Base in Goldsboro, North Carolina, for an in-depth look at life in the U.S. Air Force.

Airmen from the 333rd Fighter Squadron “Lancers” hosted Wallace as part of Mission 600 – Charlotte Motor Speedway’s primer for the patriotic Salute to the Troops before the nation’s most patriotic Memorial Day weekend celebration at the Coca-Cola 600.

“What an awesome day here at Seymour Johnson,” Wallace said. “To get to see some of the coolest, most lethal aircraft is cool – a really special day. It’s great to see what the military go through and their everyday life is truly special. I had a great day. Thanks to everybody at Charlotte Motor Speedway and Richard Petty Motorsports. I’m getting prepped for the Coca-Cola 600 and Memorial Day is when we’re really giving our attention back to our military and remembering those who fought for our freedom and gave their lives so we can do what we do.

“Seeing an F-15 up close and personal was really cool. Being able to climb inside the cockpit was super cool – to see them get strapped in. It’s very similar to what we do. It’s like us walking out of our motorhomes to climb in our racecars. They’re walking out of their offices to go fly in a fighter jet, which is probably 10 times more badass than what we do.”

Lt. Col. Chris Auger, the squadron commander for the 333rd Fighter Squadron, spoke to the importance of having people like Wallace help shine light on the service and sacrifices of airmen like those at Seymour Johnson.

“We were more than happy to have Bubba here to get out and see what these guys do,” Auger said. “All of the airmen who work here, there are about 5,000 airmen who work on this base to protect our country and keep these 92 (F-15 E) Strike Eagles up in the air. They shed blood, sweat and tears every single day, so they’re the ones we owe credit and we want to recognize their hard work they do every single day to defend our country.”

Alex Bowman and the No. 88 Nationwide Chevrolet Camaro ZL1 pit crew will continue Mission 600 on May 17 with a fifth and final stop at U.S. Coast Guard Station Wrightsville Beach.

As part of the salute to the military, race fans are encouraged to use the hashtag #KnowYourMil.

Through the speedway’s “Patriot Partners” program, race fans or corporate customers can buy a Coca-Cola 600 race ticket to send a member of the U.S. Armed Forces to America’s Home for Racing for just $25.