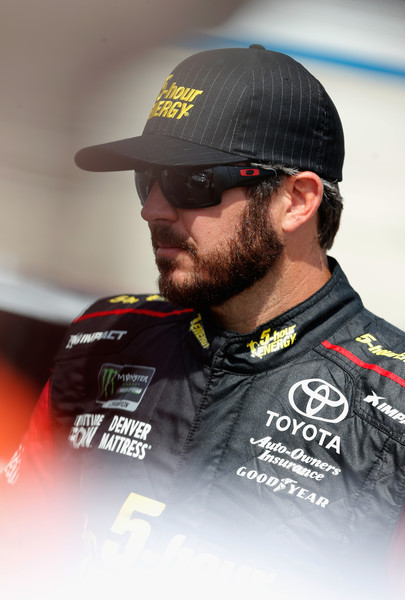 Martin Truex Jr. will be aiming for a three-peat at Kansas Speedway, a track where he suffered a few misfortunes over the years but rebounded with a vengeance last season scoring both wins at the 1.5-mile oval.
“Winning three straight at Kansas would be pretty special,” Truex said. “We’ve been so good there the past three or four years but also had some heartbreakers after having the best car and not winning. Getting those two last year meant a lot. It was gratifying to get the job done but still feel the track owes us a few more.”
Truex will have the opportunity to score his first three-peat at a NASCAR Cup Series venue Saturday night while driving the No. 78 5-hour ENERGY/Bass Pro Shops Toyota in the 267-lap, KC Masterpiece 400.
“For whatever reason Kansas has always been a good track for me,” Truex noted. “There’s something about the transition in the corners there that I am comfortable with. The balance of the cars I have had there just seemed to make speed. That is why I am definitely looking forward to going there and hopefully repeat what we did last year.”
Truex’s 713 laps led at Kansas ranks second to Matt Kenseth’s 774. Truex has been the Kansas lap leader four times. His two best laps led were at the spring races in 2012 (173) and 2016 (172). He finished second in 2012 and 14th in 2016 proving that the best car doesn’t always win.
“Kansas is a really fast track and you have to be aggressive in a comfortable-feeling car,” Truex stated.
The Furniture Row Racing driver is coming off a gritty fourth-place finish at Dover, his sixth top-five of the season, which includes one victory at Fontana, Calif.
The Dover result snapped a four-race bad-luck streak for Truex. His finishes in those four races were 37th in Texas (flat tire that led to an accident), 30th at Bristol (collected in Lap 3 accident), 14th at Richmond (pit stop glitch late in race) and 26th at Talladega (collected in multicar accident).
“Our performance so far this season has been up and down a little bit,” said Truex who is ninth in driver points. “But speed wise we’ve been there each and every week. We’ve had really fast cars and I feel like we’re right there in speed where we were last year.
“But we had a few stumbles along the way, and had some unexpected things come up here and there that have bit us. Speed wise I think we’re in good shape, if we can clean up the rest of the stuff we’ll be really good.”
Truex’s career record at Kansas Speedway includes 19 starts, two wins, six top fives, seven top 10s, two poles and 713 laps led. His average start is 10.6 and average finish is 15.1.