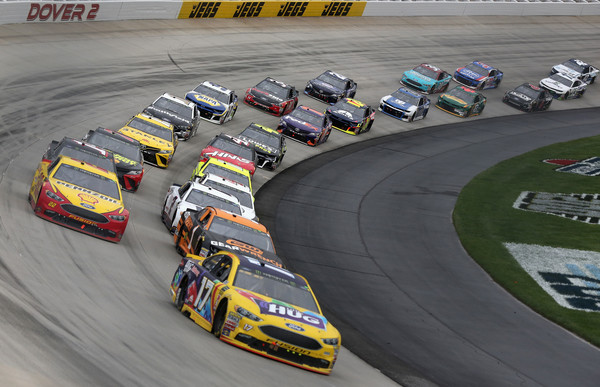 “Our Little Hug Fruit Barrels Ford was fast right off the bat,” Stenhouse said. “Starting fifth set us up for the race. I felt like we had a top-15 to a top-10 car all race. We decided to stay out on that caution to save a set of tires. We had a great restart. I tried to gap myself as much as I could because I knew the guys that got four tires would be coming. I really wished it would have rained when we were leading. All in all, it was a great weekend for our No. 17 team.”

After earning a solid top-five qualifying position, the two-time Xfinity champion steadily ran in the top 10 for the majority of stage one. With an early caution in the stage, many teams tried stretching their fuel mileage to make it to the end of the stage. Crew chief Brian Pattie told Stenhouse to go into fuel conservation mode even if the Little Hug Fruit Barrels Ford lost a few positions. Stenhouse was able to save enough fuel to take the green-checkered in the 13th position.

In the second stage, the Olive Branch, Miss. native worked his way back inside the top-10 before a tight handling condition cost him a few positions forcing him to settle with a 14th– place finish when the green-checkered waved at the end of stage two.

With a few early cautions at the start of the final stage, crew chief Brian Pattie told Stenhouse to stay out under one of the cautions for track position. The 2017 MENCS Playoff contender led the field to green and was able to pull away and lead for the next 24 laps before surrendering the lead to the No. 14 who had fresher tires.

With only 85 laps remaining, mother nature forced NASCAR to display the red flag to allow time to dry the track. After a brief 45-minute delay, the red flag was lifted and Stenhouse rolled off in the sixth position, Once back to green, the Roush Fenway Racing driver battled a loose handling machine forcing him to settle with a 15th-place finish at Dover.

Stenhouse and the No. 17 team travel to Kansas Speedway next weekend. Race coverage starts at 8 p.m. EST on FS1.