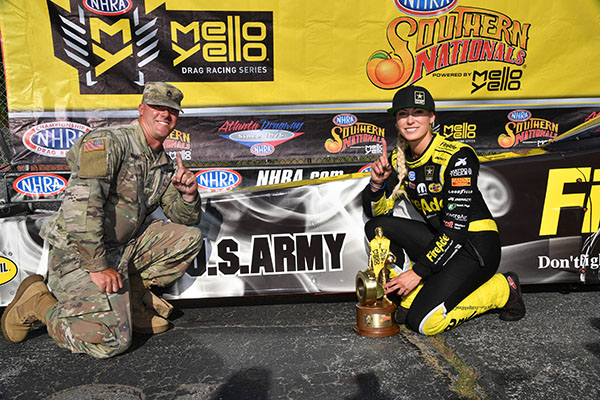 While mechanical failures knocked U.S. Army Racing’s Tony “The Sarge” Schumacher and Antron Brown out in the first round of the 38th annual NHRA Southern Nationals, their teammate Leah Pritchett carried the U.S. Army Racing torch by racing to her first victory of the season on Sunday at Atlanta Dragway in Commerce, Georgia.

After qualifying for an NHRA record 350th consecutive Top Fuel event, Schumacher was looking to conquer the Southern Nationals for the first time in his illustrious career and by doing so, end a pair of winless streaks. Atlanta Dragway is the only track currently on the NHRA schedule where the eight-time Top Fuel world champion has yet to win, and he has been stuck on 83 career wins, spanning 27 events, since his 2017 Gatornationals triumph.

Schumacher qualified the U.S. Army Dragster for Don Schumacher Racing (DSR) fifth and faced Bill Litton, who he defeated two weeks ago in the first round of the Spring Nationals at Royal Purple Raceway. Unfortunately, Schumacher’s machine lost a cylinder as soon as he launched off the starting line. His lap of 3.925 seconds at 311.27 mph wasn’t enough to defeat Litton, who made a run of 3.915 seconds at 315.56 mph, and both streaks will continue.
“To say we are frustrated would be an understatement,” Schumacher said. “One of my favorite philosophies is ‘over prepare and go with the flow.’ We were prepared to win Atlanta today. The flow didn’t go as planned when the engine dropped a cylinder at the step. I knew we were in trouble as soon as I hit the gas. Litton had only gone down the track once all weekend and we weren’t taking him lightly. We were prepared to make a run in the 3.70’s. Hats off to him for making it down the track again. We just couldn’t get by him on seven cylinders. You do everything you can to be ready, but sometimes in racing, something out of your control costs you. This U.S. Army team is filled with incredibly talented and smart people, and we will not give up. I know we will win races. This U.S. Army car is too good right now not to be winning. It’s on to Topeka now.”

Brown, the four-time Southern Nationals winner, qualified the Matco’s ‘Tools for the Cause’/U.S. Army Dragster for DSR seventh and faced off with Blake Alexander to open eliminations. The three-time Top Fuel world champion was looking to score his ninth Southern Nationals first-round victory in Top Fuel. Following a strong start, he lost a cylinder before halftrack and split seconds later his powerplant exploded resulting in a run of 4.634 seconds at 149.33 mph. It wasn’t enough to defeat Alexander, who made a clean pass of 3.827 seconds at 323.97 mph to advance.

“We just need to keep fighting,” Brown said. “We’ve been in situations before where we’ve had a tough start of the season. It tries to beat you down, but this is when you do the most learning. We’re learning as a group. The car was on the way to a .77 or a .78. We were nowhere near 330-feet and we were at 2.18 seconds when it dropped a hole and then backfired on the opposite side of the engine. Mark (Oswald) and the guys are looking at some stuff. We need to figure out what the cause is. Now we just need to get ready to go to Topeka. We like where the performance of our car is headed. We ran a 3.80 last night and we would have had a high 3.70 run here today. So our focus is just to go to Topeka and make complete runs. Once we can make complete runs, then we can start racing. I just need to keep up my game and stay focused.”

Pritchett made three strong passes in qualifying and four stout runs Sunday to score her sixth career NHRA Top Fuel triumph aboard the FireAde/U.S. Army Dragster for DSR. After qualifying fourth, she made a clean pass to start the day with a run of 3.903 seconds at 293.73 mph and defeated a tire-smoking Pat Dakin in the first round. She then beat the upset-minded Litton in the second round with another stout run of 3.841 seconds at 322.50 mph. In the semifinal round, Pritchett jumped to an early advantage over another upstart Mike Salinas and pulled away to the finish line, reaching the stripe first with a pass of 3.907 seconds at 312.42 mph compared to Salinas’ pass of 4.212 seconds at 211.66 mph to reach her ninth career final. In the final, she was machine-like with a run of 3.874 seconds at 322.42 mph surging to victory over Alexander, who posted a lap of 4.287 seconds at 199.43 mph but was disqualified for leaving early.

Pritchett’s victory was the first for DSR in Top Fuel since her triumph in Brainerd last August. She also became the 24th different driver to win in Top Fuel at Atlanta Dragway.

“This win feels incredible,” Pritchett said. “It’s been a while, but I think a (win) drought is all relative. This FireAde/Mopar/U.S. Army team knows what it’s like to win and we still have that in our hearts and that’s what we grasp to. And, yes, we may have been the only Top Fuel car for DSR that advanced out of the first round today, but we felt the world of support from the entire organization knowing they were all behind us as we made our run to this win today. Thank you, Don Schumacher, for believing in me and giving me a chance two years ago. And for all of Don Schumacher Racing, all the fans, all the guys back at the shop that put those race cars together and keep us safe, this one is for you. It was a special weekend here in Atlanta for a lot of reasons including the ability fulfill a dream of Make-A-Wish child, Luci Toman. She is a true inspiration and it was great having her with me all weekend. We both got our dreams to come true this weekend.”

After seven rounds of the 24-event NHRA Mello Yello Drag Racing Series for 2018, the top-10 drivers the Top Fuel standings are:

Next up is the 30th annual Menards NHRA Heartland Nationals at Heartland Motorsports Park May 18-20. FS1 will broadcast Sunday’s elimination rounds during a live three-hour show beginning at 2 p.m. EDT.