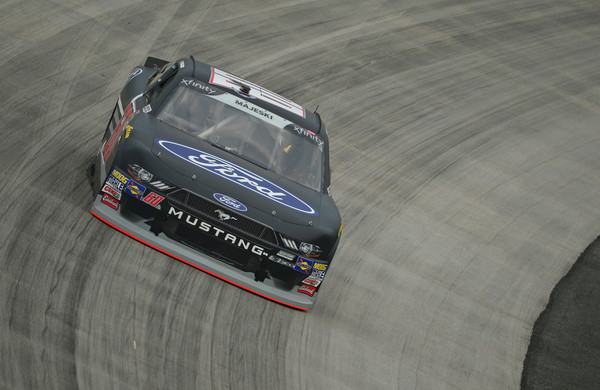 In his first ever start at Dover, Ty Majeski qualified ninth and led laps at the “Monster Mile” before a mechanical issue sent him to the garage for repairs. The rookie returned to the track learning and logging laps before an incident late in the race ended his day early, resulting in a 34th-place finish in his No. 60 Ford.

“Overall, we had a really fast Ford Mustang,” Majeski said. “We were really good through the first stage, just kind of learning about racing here at Dover. “We short pitted that first stage to try and get track position for the second stage,” Majeski said. “I got the lead and restarted up front and the No. 1 car got into the back of me simultaneously when I was shifting into fourth and broke the gear. I came back out and the car had really good speed,” Majeski added. “There were times when were had top-five speed, consistently in the top 10. We had a really fast Ford Mustang, just nothing to show for it.”

After rolling off the grid ninth, the Seymour, Wisconsin, native maintained his spot inside the top 10 through the opening 30 laps. When a caution flew at lap 31, crew chief Mike Kelley called for the No. 60 Ford Mustang to pit early.

Majeski did just that and restarted 29th at lap 35, climbing all the way to 17th to end stage one. With the leaders heading down pit road, the 23-year-old took over at the front to start stage two. As quickly as the lead came, it was gone. Ill-time contact from behind contributed to a broken axle and sent Majeski to the garage for repairs.

Kelley and the team chose to change the transmission on Majeski’s Ford, allowing him to return to the track to gain valuable experience by logging laps at the one-mile track. Then, as the laps wound down, Majeski was turned from behind by the No. 39, ending his day for good.

Majeski returns to the No. 6 machine on Saturday, May 26th at Charlotte Motor Speedway.