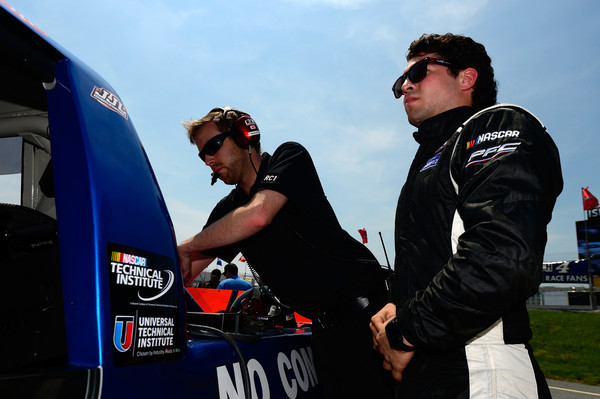 For the second consecutive race, Jesse Little wheeled his No. 97 JJL Motorsports Ford F-150 into contention for the win during Friday afternoon’s JEGS 200 at Dover (Del.) International Speedway.
After qualifying fifth hours before the start of the fifth race of the season, Little and his Matt Noyce
led team felt confident in theirNo. 97 PFC Brakes | Penske Racing Shocks Ford.
Throughout the first two stages, Little cleverly raced his family-owned truck inside the top-five claiming fifth in Stage 1 and raced hard inside the final five laps of Stage 2 to again place his No. 97 machine fifth at the conclusion of Stage 2.
A great pit stop by his JJL Motorsports team gained the NASCAR Next alumnus a position on the race track, restarting fourth for the final stage.
Picking up two positions on the restart, Little hunted down race leader Johnny Sauter, passing the No. 21 Chevrolet in traffic allowing the Sherrills Ford, N.C. native to lead his first laps in NASCAR Camping World Truck Series competition.
Sauter passed Little back two laps later – with the 21-year-old holding the runner-up spot until a caution waved on Lap 156 setting up for the final pit stops of the afternoon.
Unfortunately, as Little made his stop – he did not meet pit road guidelines and was assed a one-lap penalty for pitting outside the box. The mistake dropped Little from second to 13thfor the restart.
Over the remainder of the race, Little was able to retain his lost lap back and maneuver himself back inside the top-10 – but ran out of laps to climb the leaderboard higher – finishing ninth, collecting the team’s second consecutive top-10 finish.
Driver Quote:
“I’m really proud of my JJL Motorsports team. We worked hard from practice on Thursday and literally threw everything but the kitchen sink at the track and we were solid in qualifying and really came to life during the race.
“Unfortunately, I made a mistake and I’m gutted about it. Thankfully, we were able to rebound somewhat and salvage a top-10 finish. I learned a lot though and I’ll take that moving forward.
“I can’t thank my guys, PFC Brakes, Penske Racing Shocks, Ford Performance and all of our other partners for continuing to believe in our little team. I’m looking forward to Charlotte.”
Event Notes:
Next Race: N.C. Education Lottery 200 at Charlotte (N.C.) Motor Speedway on Fri., May 18, 2018.
JJL Motorsports PR/Photo Robert Laberge/Getty Images