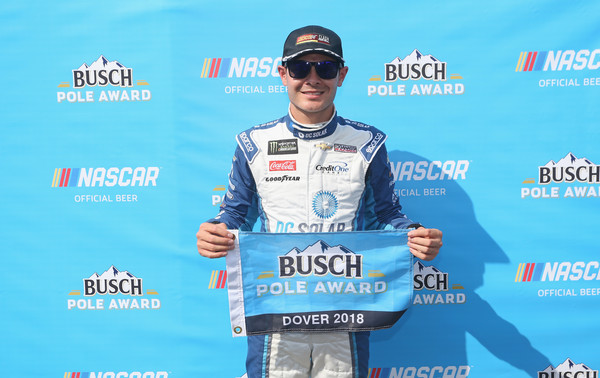 Kyle Larson powered his No. 42 DC Solar Camaro ZL1 to the pole position for Sunday’s AAA 400 Drive for Autism Monster Energy NASCAR Cup Series (MENCS) race at Dover International Speedway with a final round fast lap of 158.103 mph. It was the Larson’s first pole at the famed 1-mile concrete Delaware track, his fifth MENCS career pole, and first of the 2018 season.

“We’ve always qualified good here and I had yet to get a pole,” said Larson, who has finished second in this race the past two years. “I’ve raced well here but have yet to get a win. Maybe we’ll get both out of the way this weekend.”

The pole was the second of the 2018 season for the Camaro ZL1, which made its competition debut in the MENCS season-opener, Daytona 500, where it also led the field to the green.

This was the 696th pole in MENCS for Chevrolet, and 24th for the bowtie brand at Dover International Speedway.

Chase Elliott will start sixth in his No. 9 NAPA Auto Parts Camaro ZL1 after turning a lap of 156.733 mph.

Other Team Chevy qualifiers in the top 20 were as follows:

The AAA 400 Drive for Autism is scheduled to begin on Sunday, May 6 at 2 pm, ET.  Live coverage can be found on FoxSports1, MRN and Sirius XM NASCAR Radio Channel 90.

YOU HAVE KIND OF LED THE CHARGE FOR THE CHEVROLET’S ALL SEASON LONG DO YOU FEEL THIS IS KIND OF A TURNING POINT FOR YOUR TEAM THIS YEAR?  HOW DO YOU FEEL ABOUT CARRYING THAT QUALIFYING SPEED INTO RACE TRIM?
“Our team has been working really hard to make our cars better and better.  Each race we have gone to, they have been excited about the race cars that they have brought to the track because they have been steps in the right direction of you know more downforce, whatever.  So, it’s cool to see it paying off with us getting a pole.  Still a long weekend left but starting up front is a very important thing here.  It can get tough to pass and all that.  They made the car a lot better throughout the three rounds. The first round I was really loose landing into the corner and then the second round I was kind of opposite and really tight. The third round they kind of hit it right in the middle and was able to have a good balance to run even faster for the third round.  Happy about that and looking forward to practice tomorrow, get some laps in race trim and see what we’ve got for Sunday.”

WHAT HAVE YOU DONE AS FAR AS RESTARTS GO TO FIGURE OUT HOW TO GET THE BEST JUMP?  WHAT IS YOUR BEST DEFENSE GOING INTO SUNDAY?
“Yeah, we have been close to winning a couple of races here.  One where I was chasing Matt (Kenseth) and I just couldn’t quite get by him.  Then last year we had the fastest car at the end of the race and got beat on the last restart by Jimmie (Johnson).  Yeah, restarts on the front row has been somewhere I have always struggled and worked really hard to try and get better at that.  I feel like I have gotten better.  The last I think two races I won last year were off restart wins.  I felt like each time I’ve lost on a late restart or anytime I’ve lost it doesn’t matter a restart, whatever, I learn from it and try and get better.  I don’t know if I’m in that same position on Sunday if I will win or not, but I definitely know I will be better.”

IS THERE ANYTHING YOU HAVE LEARNED ON DIRT YOU CAN APPLY TO ASPHALT AS FAR AS RESTARTS GO?
“Restarts with the World of Outlaws are way tougher than restarts in NASCAR.  Those guys are extremely aggressive on a double-file restart where NASCAR we are aggressive, but I feel like I’m by far the most aggressive on a restart.  Where I kind of blend in the field when I’m with the Outlaws on a restart.  I haven’t gotten to race a World of Outlaw race in a while, but anytime… and I will get to start racing here soon, but I always feel like racing that stuff makes me way better when I come back to this stuff for restarts just because I learn so much from that.”

DO YOU CONSIDER THIS AN IMPORTANT MILESTONE BEING YOUR FIRST POLE ON A TRACK LESS THAN TWO MILES?
“Not necessarily.  We got the pole at New Hampshire last year and got it taken away.  So, no, I’ve always qualified well at a lot of race tracks now over the last two years.  I don’t know, it doesn’t matter, I think we have just gotten better and better each time we have come here.  I think I’ve qualified in the top five here just about every time I’ve been here.  It’s nice to finally get a pole.  There are other race tracks that I’ve qualified well at that I haven’t gotten a pole at.  So, yeah, I don’t know if it’s a milestone or anything like that.”

CAN YOU TALK ABOUT PLAYING IN THE PRO AM THIS WEEK?
“Yeah, the Pro Am I got to play in this week at Quail Hollow on Wednesday was my first ever Pro Am.  It was a lot of fun.  I was extremely nervous.  Way more nervous than I can remember being for anything else. I mean five days before the event every time I thought about it I would get my heart rate up.  But, I was able to… I was super nervous the first tee box and was able to hit it right down the fairway, so after that I calmed down quite a bit and actually hit the ball really good for me, I’m like an 18 handicap, so I hit the ball really good.  I didn’t put very well, so I shot a 91, so that was just a stroke or two off my handicap.  I was happy with it and definitely one of the coolest experiences I’ve ever been a part of.”

YOU SEEM TO HAVE BECOME A BIG GOLF FAN:
“No doubt.  I love golf.  I have gotten more and more into it as each week passes by I become more obsessed with it.  You go in my motorhome or at home and my TV is always set on the golf channel. I golf probably two or three times a week now.  Just trying to get better. I’ve only been playing for about two years and it’s not any fun being the worst one out of the group of friends you play with.  The last six months or so I’ve gotten better than some people that we play with which is nice. I still have a lot of room to improve and I feel like I am improving.  Just got to keep working at it.”

YOU SAID ON FOX YOU HAVE NEVER FELT LIKE YOUR TEAM HAD BEEN BEHIND WITH THE NEW CAMARO.  HAVE YOU HAD ANY FEEL FOR WHAT THE CHEVROLET CAMP AS A WHOLE HAS BEEN GOING THROUGH?
“Our team hasn’t once I feel like been stressed out about the new Camaro.  Or like ‘ah this is different than the SS.’ So, nothing has felt different for our team.  I feel like for the most part we have been just as fast at the 1.5-mile stuff as we were with the old car.  Phoenix, we were way worse than we have been there, but I don’t think that was a Camaro issue, I think that was a different issue.  Even Richmond, I think that was a separate issue.  It wasn’t a Camaro issue versus SS I think it was just a set-up issue that we had going on.  So, no, I don’t know what other people and teams are battling.  I think balance wise I feel exactly the same as what I did last year.  It hasn’t been an issue to us.  I feel like speed wise, we are close to where we were.  I think Ford in general has been a lot better than they were last year.  I think that is probably where we look like we are struggling, but I don’t think we are really struggling.”

ON PLAYING WITH THE PRO GOLFER AT THE PRO-AM:
“Yeah that is the first time I played with an actual pro.  In our Golf Guys tour we have a pro, but he is not really a pro, he sells golf clubs (laughs).  But, yeah, just to get to play with him and see how good they hit the ball every single time is amazing.  He gave me a couple of pointers, which helped a little bit and that was nice.  He did a great job as our pro, talking to us quite a bit, he just had a baby boy a month ago, so we talked about family a lot.  It was just very relaxing out there on the golf course and all the fans there didn’t really bother me at all either.  It was just cool to get to play with him and get to experience the whole thing.”