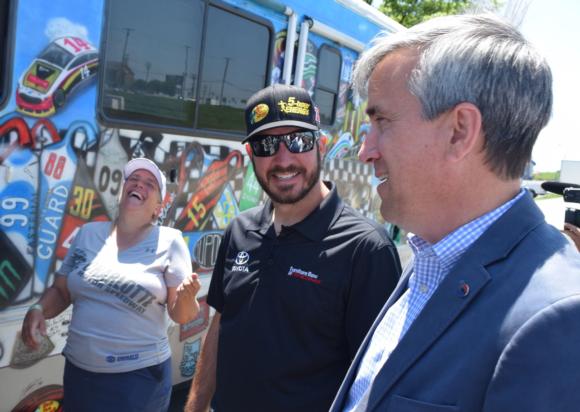 Martin Truex Jr. has encountered many different forms of vehicles at Charlotte Motor Speedway, but the defending Monster Energy NASCAR Cup Series champion discovered a new one during a ROVAL™ Fan Day event on Wednesday. Truex – who has won both the Coca-Cola 600and the Bank of America 500 – met Bernie and Charlene LaPensee of Hillsdale, Ontario, and autographed the ornate, 34-foot RV the two brought to the speedway to attend this month’s races. Additionally, Truex went to work in the speedway’s ticket office, calling race fans and surprising them with tickets to upcoming races.

“It was definitely a thrill for him for sure,” Truex said of Bernie LaPensee after the Canadian race fan followed him around the ROVAL™. “I’d like to go a little faster, but it’s definitely cool to see that. To see how long they’ve been coming here and their passion for the sport, it’s amazing. I hope they have a great time over the next month here at Charlotte. I’m sure they will.”

The LaPensees said their 12-hour drive from Ontario to North Carolina is already worth it – and they’re still weeks from witnessing the thrill of NASCAR’s biggest stars at America’s Home for Racing.

“It’s a great trip around and I wish we could’ve gone a little faster in the RV, but maybe next year we’ll bring a faster RV,” Bernie LaPensee said. “I enjoy coming to Charlotte more than any other track. We plan on it, we have great friends here and as an older race fan once told me, this is a family event. A race just breaks out.”

Truex said the event on Wednesday was a blast – from ride-alongs to phone calls.

“(Calling the race fans) is a really neat thing to do,” Truex added. “I’ve done it a few times before, and just to surprise them and hear the excitement in their voices really makes my day. You never know on the other end what’s going on and what it means to them. It’s definitely a humbling deal to hear their excitement. One lady sounded like she was almost in tears. It’s crazy to think about the impact that we have on the people who love this sport. It reminds us how lucky we are to do this and how awesome the fans are in NASCAR.”

Patricia Proctor of Salisbury, North Carolina, was one of the lucky fans who received a call from the defending series champion.

“I couldn’t believe it was him at first,” Proctor said of Truex. “He was so nice and he thanked me for being his fan and for coming to Charlotte. I was so excited. … I may be 71, but I’m acting and feeling like a teenager right now.”

As part of Truex’s eventful visit to the speedway, the driver of the No. 78 Furniture Row Racing Toyota received his Bank of America 500 winner’s ring, signed autographs and posed for photos with race fans. He’ll return to Charlotte in slightly more than two weeks’ time to prepare for the May 19 Monster Energy NASCAR All-Star Race – the only major Charlotte race Truex has yet to win.

“The last two years, we’ve ran so well in the 600 but we haven’t figured out how to have good speed for the All-Star Race,” Truex said. “The All-Star weekend is always fun. There’s no pressure. It feels like a Saturday night shootout.”

TICKETS:
To purchase tickets to the Sept. 28-30 Bank of America 500 as well as any of the 10 Days of NASCAR Thunder events in May, fans can call the speedway ticket office at 1-800-455-FANS (3267) or shop online at www.charlottemotorspeedway.com.