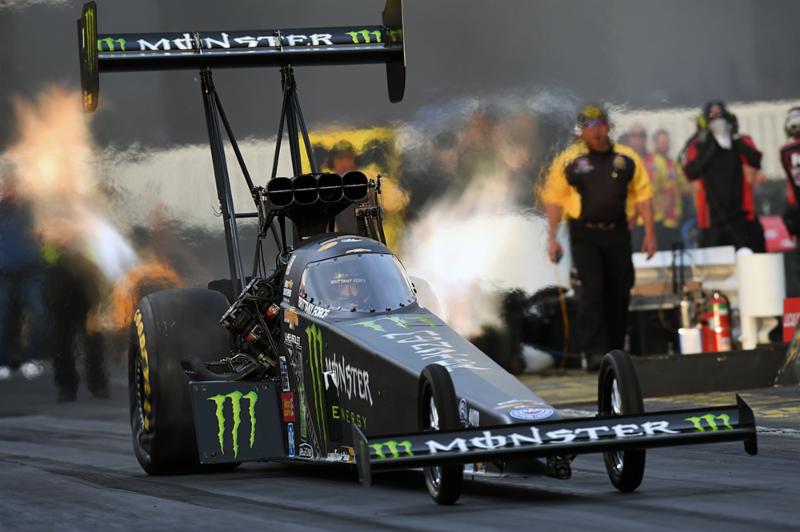 Top Fuel world champion Brittany Force is heading into the NHRA Southern Nationals with her head held high. The pilot of the Monster Energy dragster is on an upswing. After suffering the lowest low of her career, a devastating crash at the season opening NHRA Winternationals in Pomona, Calif., Force has secured a race victory and a No. 1 qualifier under her belt, putting her in competitive spirits heading to Atlanta Dragway located just outside of Atlanta.
Force tallied her first victory of the season at the NHRA SpringNationals near Houston and, the very next weekend, powered to her first No. 1 qualifier of the season, doubling up with sister Courtney Force who was No. 1 in Funny Car, at the NGK Spark Plug NHRA Four-Wide Nationals. Race day at the four-wide event in Concord, N.C. didn’t go as picturesque as the eight-time career event winner had hoped but that’s okay because Atlanta is right around the corner.
“It’s tough out there at four-wide and conditions changed every single day so that was a lot on my crew chiefs and the entire team. Unfortunately, we went out in the first round. But the good thing is we pack up and go to the next one in Atlanta right away,” explained Force.
The NHRA Southern Nationals is the third of three back-to-back races on the NHRA Mello Yello Drag Racing Series schedule, it can be a grueling travel schedule and takes its toll on race teams but Force enjoys the constant competition.
“This race in Atlanta will be the last race of three in a row and I think it just puts the whole team in that groove. It sets a pace,” Force said. “We are very happy with the new car and how it has been running. We won Houston and we were No. 1 in Charlotte. Our routine is set and you are just more familiar with everything. You don’t have two weeks off and then have to come back to the track and think about what you have to do. It all flows and I like that momentum.”
Before hitting the track for qualifying, Force will take part in an annual champions appreciation dinner on Wednesday thrown by the NHRA Mello Yello Drag Racing Series sponsor who call Atlanta home.
“There’s a championship appreciation dinner and I am looking forward to going to it for the first time,” Force said. “It is cool because it recognizes this Monster Energy team’s accomplishments from last season which is something I am proud of. To be able to be there with other champions, like my dad (John Force) and Robert (Hight), it is outstanding, to be in that room of champions. It moves everything forward and it makes me think about how badly we want to get another championship.”
In addition, Force will be making an appearance at the Atlanta Airport USO to show appreciation to the men and women who serve in the nation’s military. The 2017 championship crown holder will be joined by a list of other current and past champions serving lunch, signing autographs and taking photos throughout Thursday afternoon.
Qualifying at the NHRA Spring Nationals begins Friday with two sessions at 4:15 p.m. and 7:30 p.m. and continues Saturday with sessions at noon and 3:30 p.m. FOX Sports 1 (FS1) will have live coverage of Friday qualifying beginning at 7:30 p.m. ET. Eliminations are slated for Sunday at 11 a.m.
JFR PR
Post Views: 139