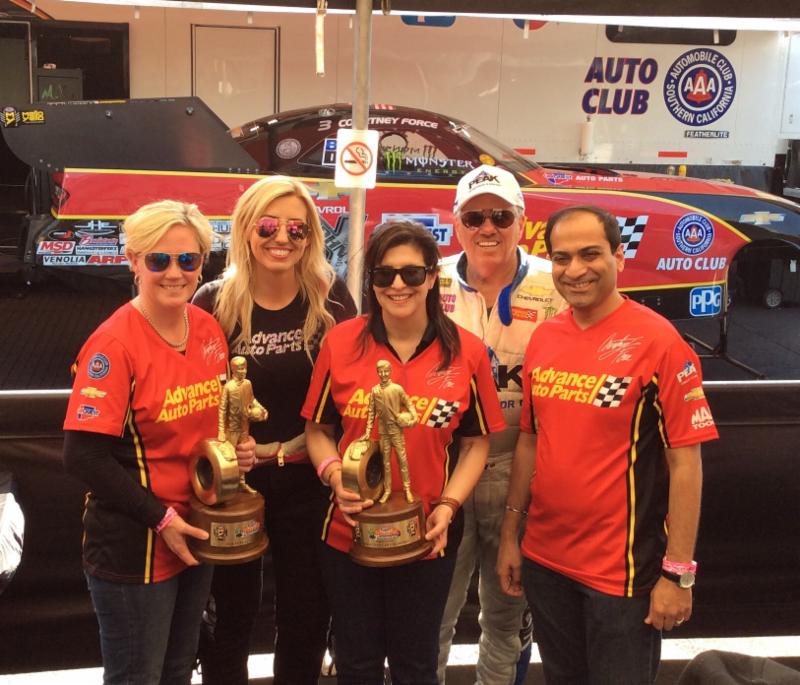 On Saturday at the NGK Spark Plugs NHRA Four-Wide Nationals, nine-time NHRA event winner Courtney Force presented her 2018 NHRA Arizona Nationals Wally to executives representing her primary sponsor Advance Auto Parts. Between the third and fourth qualifying sessions in the John Force Racing track-side hospitality area, Executive Vice President and Chief Human Resource Officer Natalie Rothman, Senior Vice President – Marketing, Insights, Analytics Yogi Jashnani and Division President Maria Ayres accepted two trophies to commemorate Force’s first victory in partnership with the organization.
“Thank you so much for your support. We wouldn’t be out here doing what we love without Advance Auto Parts,” said Courtney Force. “I want to thank everyone on the distribution and corporate side. This is a real team effort. I am so proud to give you these trophies and I am hoping to give you an even bigger trophy at the end of the season.”
In Arizona, Force was the No. 1 qualifier and set low ET and speed during the second event on the NHRA Mello Yello Drag Racing Series season. Force has continued to be consistent all season in her Advance Auto Parts Chevrolet Camaro SS Funny Car. She was No. 1 at the Las Vegas four-wide race and was the No. 1 qualifier at the NGK Spark Plugs NHRA Four-Wide Nationals and raced to the final quad of each event earning semifinalist points. Force is now second in the NHRA Mello Yello points standings.
JFR PR