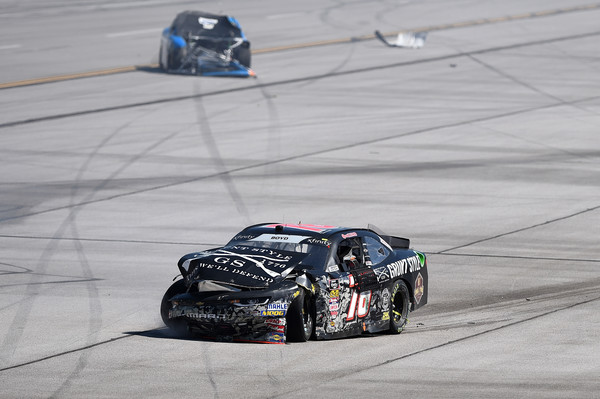 Superspeedways tend to produce a racing product that fans find very exciting.  This excitement often gets combined with uncertainty when teams and drivers head to Talladega.  This time, on this day, it didn’t turn out as hoped for Spencer Boyd and the SS Greenlight team as the No. 76 Grunt Style Camaro’s day ended in the race’s second caution.

“Our strategy was playing out well in the first segment,” Boyd said.  “We had a very fast race car, but our goal was to be patient, so we stayed in line with the second pack.  There was one time I gave the four car a bump to see if he wanted to create an inside line, but he wasn’t going for it.  I ended up dragging the brake quite a bit there which in the end hurt us.”

As Daniel Hemric took the green checkered in the first segment, all competitors came into the pits for tires and gas.  Boyd would overshoot his stall fighting low brake pressure from the previous run. This overheated brake issue would ultimately end his day short.  As the 28 of Dylan Lupton and the 40 of Chad Finchum tangled in front of Spencer early in the second segment, he couldn’t build enough pressure in the brakes to slow down his car in time to avoid the wreck.

“I’m disappointed for a whole bunch of reasons, but I know our small team will remain positive as we look forward to Dover,” reflected a steadfast Boyd.