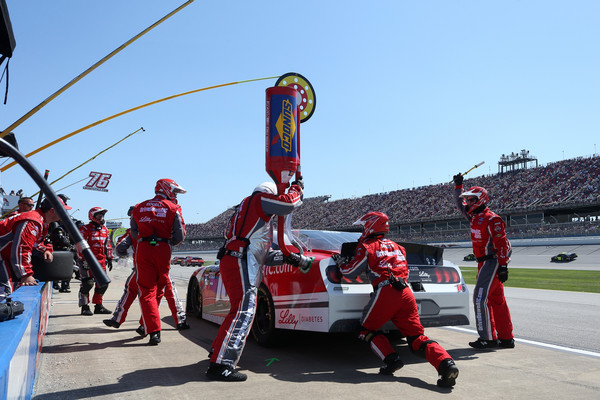 Ryan Reed had one of the fastest cars all afternoon at Talladega Superspeedway.  The No. 16 Drive Down A1C Lilly Diabetes Ford led laps and was a constant factor in the top five until a car spun in front of Reed coming to pit road for a green flag pit stop towards the end of the race.  Reed flat spotted the tires avoiding the spinning car and then was trapped a lap down to the field.  A caution never fell his way the remainder of the race, resulting in a 22nd-place finish.

“They wrecked in front of me and I was trying to get stopped to miss them wrecking and locked them up,” said Reed.  “We went a lap down there and after that it was just trying to hold on. Then we pitted and the No. 7 ran out of fuel. We had a really fast Mustang and we led laps. Our car was good, it was good enough to go up there and contend for a win. We knew that. We know it every time we come to these. We win some and lose some. Daytona is better to us than Talladega for sure. One of these days we will figure out the Alabama luck.”

Reed started the race 19th and cracked the top 10 over the course of Stage 1, but ultimately closed out the segment 14th while saying his Ford was a little free on entry and he needed more stability.  A pit stop for fuel and a chassis adjustment gained Reed track position and set him up fourth for the start of Stage 2.

Reed led laps over Stage 2 and solidly held his ground inside the top five to close out the 25-lap segment third.  A little more pit strategy came into play and at the Stage break Reed visited pit road for just left side tires and fuel.  The strategy call lined Reed up third for the final Stage.

A caution fell just a few laps into the final Stage and while under caution Reed was called down pit road for right side tires and fuel.  Reed took the green 18th with 47 laps remaining.  Everyone in the field was short on fuel and would have to pit to make it the full distance of the race.  Crew chief Phil Gould made the call to short pit and top off fuel early when strong drafting partners were ducking onto pit road.

Getting onto pit road under green can be tricky at Talladega and one of the cars lost control and spun, causing Reed and others to check up.  Reed flat spotted his tires avoiding the incident and had to receive four fresh Goodyear tires in addition to the fuel they needed.  Reed went a lap down and the caution never aligned to get him a lap back.  Reed crossed the finish line 22nd, one lap down to the leaders.