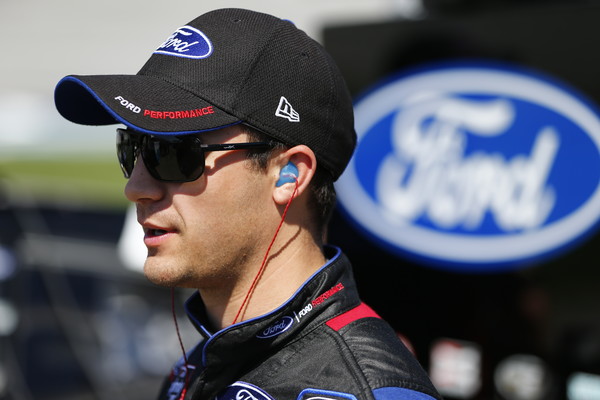 “I am not exactly sure what happened,” Majeski said afterwards. “All I know is that I got right-hooked from behind and got in the outside wall and got t-boned by someone then hit the inside wall. That was the hardest hit I have taken in my life. It is unfortunate. I thought we had a good Ford Mustang today. We were just trying to play it safe in that first stage and I was learning how the draft works working with my teammate Ryan Reed. We were just going to kind of ride out the first two stages but that happened. It is just unfortunate.”

The Seymour, Wisconsin native barely missed advancing to round two of qualifying earning a 14th-place starting position for the 113-lap race. When the field got dicey early on in stage one, Majeski bailed out of the pack and worked with teammate Ryan Reed to feel more comfortable with the draft in the later stages. The duo worked together to earn a 13th-place finish in stage one.

After a two-tire stop during the stage break, the Roush Fenway Racing driver lined up in the 11th position for the next 25-lap stage. While working the bottom line, two cars tangled in the high groove sending the No. 28 machine into the right rear quarter of the No. 60 Ford causing a multi-car accident. The damage was too severe to continue, forcing Majeski to settle with a 37th– place finish in his first career superspeedway start.

Majeski is back in the No. 60 next weekend as the team heads to the ‘Monster Mile’. Race coverage will air at 1:30 pm ET on Fox Sports 1 on Saturday, May 5.