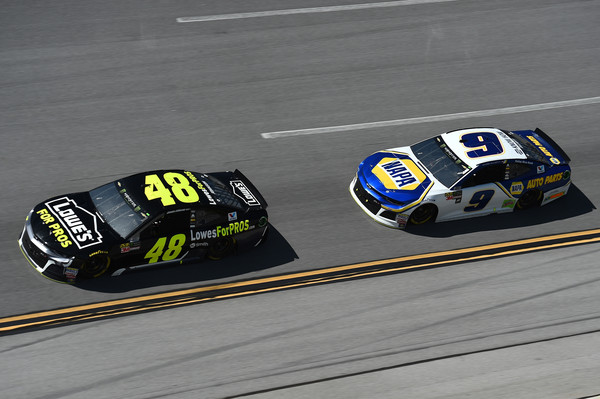 THE MODERATOR:  We’re going to get started with our post-race media availabilities.  We are joined by our third‑place finisher, Chase Elliott, driver of the No. 9 NAPA Auto Parts Chevrolet.

Chase, take us through the final surge there.

CHASE ELLIOTT:  It was definitely interesting.  Last few laps was really trying to make a run and do something there at the end.  Those guys were being awfully patient with one another.  I was very surprised.  I mean, it was more than obvious that they were not going to help me move forward.

We had a solid car.  I don’t think it was the best car today, but we had a good car.  Our team did a nice job overcoming a little bit of damage there mid portion of the race.  Alan made a good call there towards the end to ultimately get us some track position and have a shot.

It was a pretty wild afternoon.  Cars were hard to drive.  Scared some people off from running three‑wide and four‑wide.  That was interesting, as well.  So, could have been worse.

Q.  Chase, could you talk about being the Chevy in the Ford sandwich there.  You really were kind of the lone man and got it done.

CHASE ELLIOTT:  Yeah, it was interesting.  Like I said a second ago, I was really surprised with how patient they were being with one another.  Really thought they would want to win a little more than what they did, or at least showed to me.

I tried to kind of break out of line and do a couple things there.  Like I said, it was very obvious that nobody was going to help me, around me.  It’s hard to move forward.  Even if I had just had one other person to help, I felt like it would have made a big difference.  Like I said, could have been worse.

THE MODERATOR:  Thanks for joining us.

“I’m just happy to have been in front of the ‘Big One’ for a change. The start of our weekend saw us caught up in a practice wreck. It is what it is at a place like this. So many things happen here that are out of our control but we kept our primary engine and raced the back-up. Stage 1 did not go as planned for us but we managed to get back out front by Stage 2 to run in the top 10. My plan was to go when we could, but be smart about it and fortunately for us, we had luck on our side. We’ve been running well but haven’t had much to show for it as of late so I’m happy that this Cat Racing team can leave here with a ninth-place finish.”