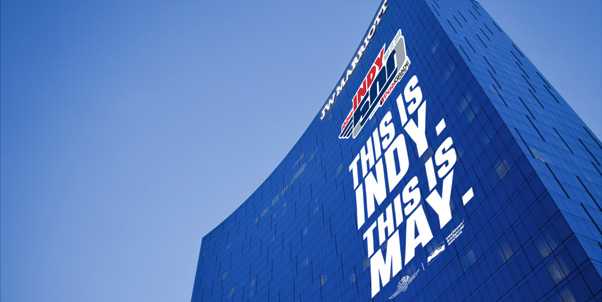 The biggest reminder of the Month of May at the Indianapolis Motor Speedway is visible on the Indianapolis skyline, as Verizon IndyCar Series owner-driver Ed Carpenter helped to finish the installation today of a huge graphic celebrating the 102nd Indianapolis 500 presented by PennGrade Motor Oil on the façade of the JW Marriott Indianapolis hotel.

The graphic, which is more than 16 stories tall, features the event logo for the 102nd Running of “The Greatest Spectacle in Racing,” the phrase THIS IS INDY. THIS IS MAY. and logos of IMS and the Verizon IndyCar Series.

This is the third consecutive year the sleek, glass façade at the JW Marriott Indianapolis has featured a decal with a massive Month of May message for Central Indiana residents and visitors from around the world who will flock to the INDYCAR Grand Prix on Saturday, May 12 and the 102nd Indianapolis 500 presented by PennGrade Motor Oil on Sunday, May 27 at IMS. Indianapolis-based Sport Graphics has completed the project all three years.

“This larger-than-life graphic is one of the most visible symbols of the upcoming excitement at IMS during May,” IMS President J. Douglas Boles said. “Indianapolis is a world-class city that is one of the best hosts for sporting events of a global magnitude, a reputation that started with the inaugural Indianapolis 500 in 1911 and is enhanced every year by the great racing, concerts and fun experiences at the track in May.

“We’re grateful to our partners at the JW Marriott and Sport Graphics for continuing this new tradition. Any time I see that beautiful building this month, I’ll agree with the sign – This is Indy. This is May!”

Like events during the Month of May at IMS, everything about this exciting graphic is big. The dimensions:

•Approximately 15,500 square feet, which is more than one-third of an acre.

•More than 16 stories tall, taller than the iconic Pagoda at IMS from ground to roof.

•The top of the graphic is more than 325 feet off the ground, approximately 40 feet higher than the top of the Indiana State Soldiers and Sailors Monument in Monument Circle in downtown Indianapolis.

•The vinyl that comprises the graphic weighs more than 800 pounds, half of the weight of a Verizon IndyCar Series car racing in the Indianapolis 500.

“I can’t think of a better way to start celebrating the 102nd Running and celebrate this city’s unique strength to successfully host marquee sporting events,” said Phil Ray, general manager of the JW Marriott Indianapolis. “We are extremely proud to be a part of welcoming race fans into our city and inspiring pride among Hoosiers.”

Last year, the JW Marriott Indianapolis featured a graphic promoting “The Greatest Month in Racing.” In 2016, the debut graphic featured a huge rendition of the Borg-Warner Trophy presented every year to the Indianapolis 500 winner.

The hotel’s gleaming blue windows are reserved for just the biggest sporting occasions, with only the 2012 Super Bowl and 2015 NCAA Men’s Final Four receiving similar treatment.

This year’s graphic on the JW Marriott Indianapolis will be complemented by a significant décor takeover across Central Indiana, including a major presence downtown and at the Indianapolis International Airport as part of the 500 Forward initiative.

Artwork from the Welcome Race Fans program will be featured around greater Indianapolis, including the Indianapolis Artsgarden, the Athenaeum and Indy Reads Books buildings in the popular Mass Ave dining and entertainment area, and in the Irvington neighborhood.

Another art tradition, Indy Wings, returns this year as part of the Welcome Race Fans program. Indianapolis graphic artist Aaron Scamihorn created this year’s “wings” – an ode to the famed IMS “Wing and Wheel” logo – that were placed on buildings and on business fronts throughout Indianapolis and Central Indiana, providing a perfect photo opportunity for fans, pedestrians and business customers. Locations include Mass Ave and Broad Ripple in Indianapolis, Main Street in Speedway, and in the communities of Noblesville and Westfield.

Another new part of Welcome Race Fans that will engage the local arts community will be the painting of an IndyGo bus with an IMS racing motif by local artist Amy Rheinhardt on the grounds of IMS during two weekends of track activity during May, the INDYCAR Grand Prix on May 11-12 and Indianapolis 500 qualifying on May 19-20. The bus will be used as a cooling station for fans on Race Weekend May 25-27 and then be placed into service on IndyGo routes after May.

Street signs featuring the names of Indianapolis 500 drivers also will be installed soon in downtown Indianapolis as part of 500 Forward.

Visit IMS.com to buy tickets or for more information about all Month of May activities at IMS.