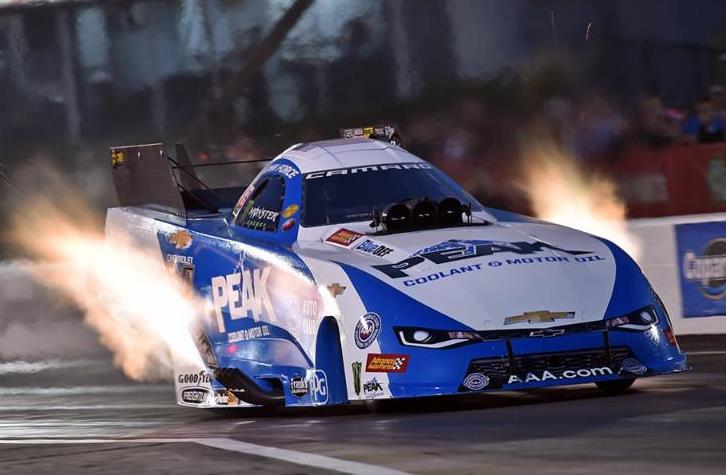 Last week in Houston at the 31st annual SpringNationals, 16-time Funny Car world champion John Force experienced the lowest of lows and highest of highs. The seven-time winner in Houston did not make the show for the first time at the historically quick race track in south Texas. The stumble snapped Force’s 221 race qualifying streak, the longest active Funny Car qualifying streak, which began in 2008. Force also holds the longest qualifying streak in NHRA history at 395 consecutive races.
While Force was relegated to team motivator on Sunday he succeeded with flying colors as two of his teammates advanced to the final round. Daughter Brittany Force secured her eighth career Top Fuel win and team president Robert Hight finished a close second in Funny Car. Hight and Courtney Force qualified No.1 and No. 2 in Houston to establish the overall Force team as one of the most dominant of the weekend.
“I didn’t get it done in Houston but I am not going to let that get me down. Not making the show only showed me how much I love this sport and how much I want to keep winning,” said Force after the Houston event. “Our sponsors pay us and expect us to win. We got the job done in Top Fuel with Brittany and Robert was right there in the Funny Car final. All our sponsors are on every race car so we win together and we battle together. I want to get this PEAK Camaro in the winner’s circle in Charlotte for sure. It was hard to be on the sidelines in Houston.”
This season has been one of the toughest for the 148-time Funny Car winner. He suffered dramatic explosions in the first three races of the season and was transported to the hospital twice but released almost immediately. The team has bounced back to race without incident in the past two events in Las Vegas and Houston. The struggle has been getting back to championship form while chasing a variety of gremlins.
“I had some problems at the start of the season and we blew up some bodies. We found the issue,” explained Force. “The problem wasn’t just one big thing, we had a couple issues to fix but we got that done with some testing before and after Las Vegas and we are on the way back. I have been at this game a long time and you have to take your bumps. You can’t win all the time and we have the brain trust all working to keep all four of these race cars at the top.”
The winner of the inaugural NGK NHRA Four-Wide Nationals in 2010 has confidence and experience on his side coming into the second four-wide national event of the season. In 2010, Force took the win light over daughter Ashley Force Hood. He was runner-up to Hight in 2014 and in eight career four-wide appearances at Charlotte, he has lost in the first quad just once. Earlier this season, in Las Vegas, Force also advanced to the second quad.
“Bruton (Smith) built an amazing race track that has four beautiful lanes,” added Force. “We are going to put on a show this weekend. I love the four-wide and I want to get another win in front of my grandstands. If I can’t get the win I’ll be rooting on my teammates. This PEAK Camaro has some magic left in it and I will be ready to get after it this weekend.”
Qualifying for the ninth annual NGK NHRA Four-Wide Nationals will begin Friday with qualifying sessions at 4 p.m. and 6 p.m. Saturday the nitro categories will return for two more qualifying sessions at 2 p.m. and 4 p.m. and final eliminations will begin on Sunday at noon.
JFR PR