Petty’s Garage and Medallion Bank to Partner with Darrell Wallace Jr. at Talladega 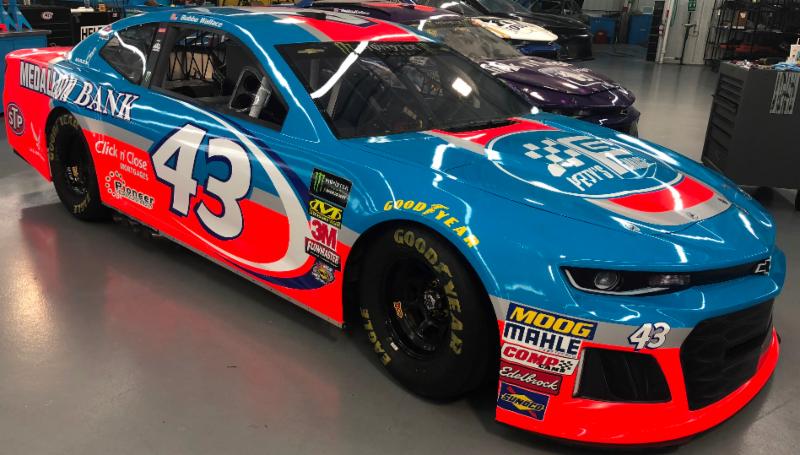 Richard Petty Motorsports (RPM) announced today, Petty’s Garage and Medallion Bank will be the primary sponsors of Darrell “Bubba” Wallace Jr. and the No. 43 Chevrolet Camaro ZL1 team during this weekend’s events at the Talladega (Ala.) Superspeedway. Petty’s Garage will be on the hood with Medallion Bank on the sides of a new No. 43 Camaro ZL1 built for this weekend.

Petty’s Garage, headquartered in Level Cross, N.C., is s speed shop that specializes in production vehicles, restoration and performance upgrades, including high performance packages for the new Chevrolet Camaro ZL1. Petty’s Garage has made it easy for fans to get their latest performance parts with a new online store at

Petty’s Garage is also the new home of custom built engines. The engine shop that built over 200 wins for Petty Enterprises is now restored with the latest equipment and technology to tune and build high performance vehicles and race engines.

“This is the perfect time for us to get in front of fans and update them on everything that is new at Petty’s Garage,” said Russ Stellfox, Chief Executive Officer, Petty’s Garage. “We’ve made a lot of progress in the past year, including introducing our new engine program and also our e-commerce store. We hope that all of the fans of Petty and Darrell Wallace Jr. will take time to see our new site this week and over the weekend.”
Medallion Bank, has assets over $1 billion and is a recreation and home improvement lending institution based in Salt Lake City, Utah.  The bank specializes in recreation loans, and home improvement loans, . For recreation loans, Medallion Bank offers an alternative financing option to other lenders’ credit scoring requirements. Its home improvement loan program gives contractors flexible financing options for homeowners wishing to make improvements.
“Medallion Bank offers a lot to those who do business in the NASCAR landscape,” said Don Poulton, CEO of  Medallion Bank. “This is an opportunity to put our name back out there in the sport during one of the biggest race weekends of the year.”
Wallace Jr. made national headlines during the season-opening Daytona 500 when he finished second. The car he raced was involved in an accident crossing the finish line, and now the team has a new speedway car prepared for Wallace Jr., who is making his first Monster Energy NASCAR Cup Series at the 2.66-miles Talladega Superspeedway.

“You are just trying to be there at the end,” said Wallace Jr. “Talladega, and all the plate races, are about being in the best position at the end and having a car that is capable of getting to the lead. We really showed in the Daytona 500 that our Chevrolet Camaro ZL1 had everything we needed. We’re going to Talladega with a new car and we’re working hard to make sure we have the same performance.”

The GEICO 500 at Talladega Superspeedway is scheduled for this Sunday, April 29. The race will be televised live on FOX at 2:00 p.m. ET and broadcast on Motor Racing Network and SIRIUS/XM NASCAR radio.