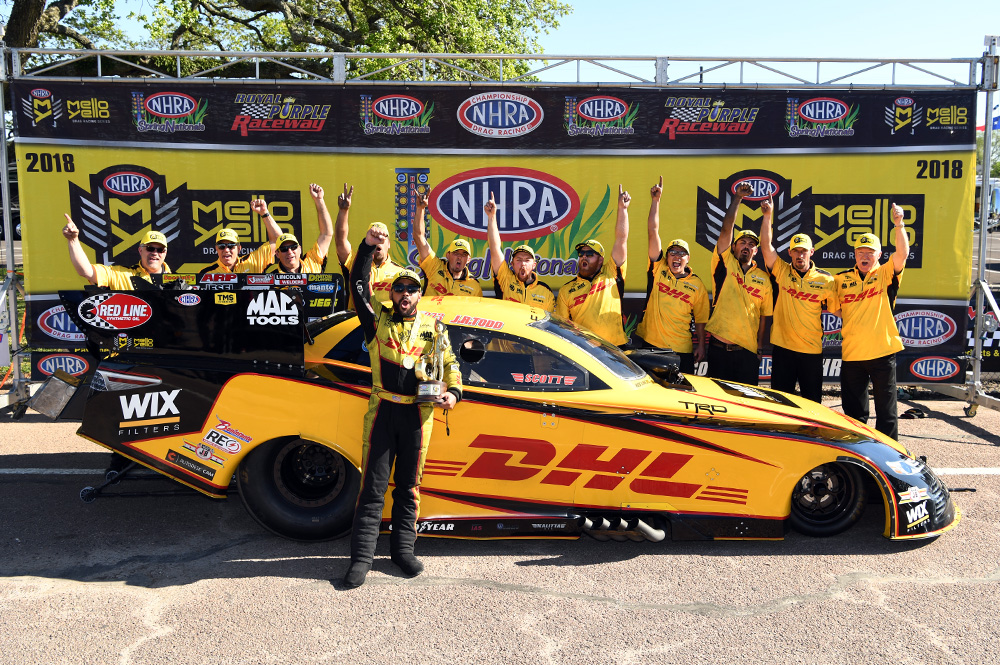 Todd had three solid qualifying passes on the track’s new surface. His best, a 3.989, came in the final session and gave Todd the 10th starting spot and a tough first round opponent of Tommy Johnson Jr., who had joined Todd in the Funny Car final in Las Vegas.

Todd was able to get over three hundredths on the starting line. With overcast conditions, Todd’s crew chiefs, Jon Oberhofer and Todd Smith, gave Todd his best run of the weekend to that point. The 3.955 second pass moved Todd to the second round over Johnson Jr.

That run moved Todd to the quarterfinals and a draw of the upset minded Jeff Diehl, who scored his first round win of the season in the opening round. Todd again got the advantage, and was skating away when Diehl had problems, giving Todd the win.

The round win advanced Todd to the semifinals with Tim Wilkerson in the other lane. Wilkerson came to the starting line after Todd in a rush. Todd did not lose focus, and was ready to go at the tree. He left first and sped away from Wilkerson, who was up in tire smoke shortly after the starting line.

Todd moved to his first career back-to-back finals in the Funny Car class. In the other lane was last season’s champion Robert Hight. The duo left together, but Todd had the advantage at the 60 foot line. Todd’s DHL Toyota Camry pulled steadily ahead and crossed the line first, giving Todd back-to-back wins for the first time in his career.

He became the third driver in track history to own Top Fuel and Funny Car race wins, and secured Kalitta Motorsports’ best start in team history with four wins in the first five races.

Opening thoughts: “I just want to keep riding the wave. I don’t think I’ve even back final rounds before this. To come here and win, that just shows that winning the Four-Wide wasn’t a fluke and that we’re capable of winning races. The Four-Wide is a bit of a novelty, its just not your standard race. I knew coming here that the track was going to be a factor and that could play into our hands. When you got down to the asphalt today, it blew the tires off. I thought to myself ‘guys can’t just go out there and throw down’. Our competitors got their stuff running well early, while we were struggling a bit. I wasn’t doubting ourselves in the final by any means. I thought if I could leave on him or even with him that would could run with him and that if we just ran like we have been that we had a pretty good shot of winning. I thought they’d run a little better than they did, though.”
What does mean to be starting the season so strong? “It’s nice to have this much momentum early in the season. We really struggled early last year and really didn’t start to put things together around the Western Swing in July last year. We started to pick up momentum at Denver. It’s nice for Kalitta Motorsports as a whole to come out swinging like we are. Winning races definitely makes Connie (Kalitta) happy and it just keeps team morale up.”
Thoughts on moving up to third in the championship? “It’s nice to be moving up in the points the way we are. It seems like every year that I’ve been out here competing for the Countdown that I’m always around the cut line. It would be nice if we can keep this going and stay up there in the top five.”
How does it feel to win four times in the last 15 races?  “I’m just happy to get a win no matter what the number. We show up every week trying to win the race. We’ll take them anyway we can get them. Today was really just a matter of survival. I was just lucky enough to turn on four win lights again.”
How does it feel to be a part of the team’s best start in its history since 1959:  “To me, not including myself, I feel that we have the best drivers out here in Shawn (Langdon), Dougie (Kalitta) and Richie (Crampton) and they’re all my buddies. We can bounce information off each other and we always have each other’s back. We want to see each other do well. It’s awesome to work with a team like Kalitta Motorsports. All the crew chiefs work well together and that’s a key to our success this year, especially in Funny Cars. Shawn and I have the same driving styles and it’s helped our program a lot.”
Tell us about your qualifying struggles this weekend: “We couldn’t get our car to run well early because you really need to apply the power before you got down to the asphalt part of the racetrack because you knew it was going to spin the tires and there’s really nothing you can do about it. So we didn’t qualify as well as we wanted to, but we did go down the track clean in three out of four runs. We just missed it on Friday night and we’re getting to that point in the season where night runs are crucial just to get your qualifying spot. I feel the runs we made during the day in the heat helped us more for today.”
After 29 races since moving over from Top Fuel are you officially a Funny Car driver now? “I guess. My fire suit is dirty and my hands are dirty and I’m still driving it all over the place, so I’m trying to be a Funny Car driver.
Is this early run surpassing your expectations? “For sure. I didn’t expect to have this much success early in the season. Looking back on last year, as bad as we were doing I was pretty hard on myself. I feel like I’m in a lot better position this year than I was last year.”