Thriller at Salem…Eckes holds off Smith for first ARCA win 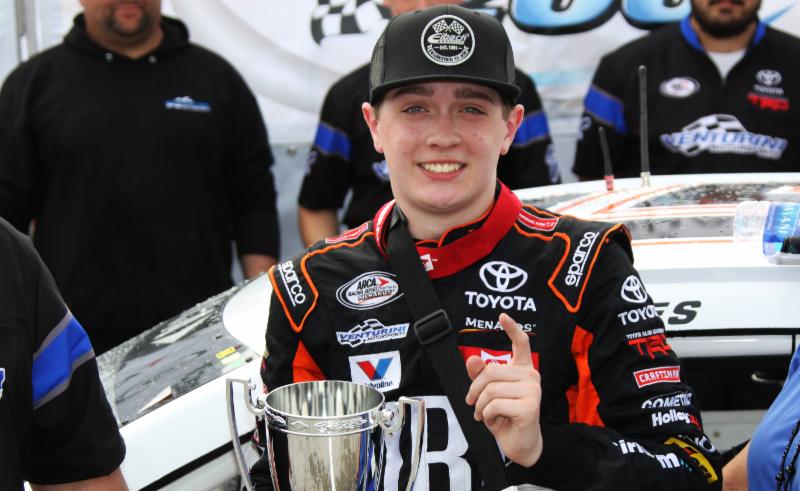 It was one for the ages, especially for Middletown, N.Y.’s Christian Eckes who held off a hungry pack over the final 50 laps to earn his career-first ARCA Racing Series presented by Menards victory Sunday afternoon at Salem Speedway.
Eckes, in the No. 15 JBL Audio Toyota for Venturini Motorsports, first fought off Zane Smith, then held back the nonstop hard charge from Chandler Smith to win the 103rd running of the Kentuckiana Ford Dealers 200.
“I can’t believe this…I really can’t,” said Eckes. “This is the biggest win of my life. This is Salem. It’s so hard to win here. I have no words to describe how relieved I am right now and how much this means to me.”
Eckes’s Venturini crew got him out first during the final stop during which the leaders took four General Tires for the thrilling run to checkers.
“This Venturini pit crew won this race…they got us out first. As a whole, we executed perfectly today. There have been so many…so many seconds. To finally get this victory…it’s the biggest one of my career.”
It also turned out to be a duel for the record books when General Tire polesitter Chandler Smith finally cleared Zane Smith with 30 laps to go and tracked down the eventual winner for the nail-biting battle to the checkers. Despite being inside of Eckes at least a half-dozen times or working over the leader’s left rear corner, Eckes somehow maintained his composure and kept the lead as the two front-runners danced in and out of lapped cars to the end.
“It’s hard…so hard to look up in the mirror and see that black car charging the way he did,” Eckes said. “I have no idea how we held him off for so long…what a day. This is a genuinely tough track to get around…it’s just a great day.”
With the white flag in the air, Smith followed in the immediate tire tracks of Eckes as both charged into turn one inches apart. Then, in an instant, Smith’s right-front tire went down as his No. 20 Smith General Contacting Toyota slid up the banking and smashed into the wall while Eckes sailed off toward the checkered flag.
Zane Smith, in the No. 41 LaPaz Margarita Mix Toyota, held off his MDM Motorsports teammate Sheldon Creed to finish second.
“We just managed tires all day,” said Zane Smith. “We put on four at the end, and it was time to go. We were riding behind the 15 (Eckes) and got a little tight late, center. Really good points day…it was a lot of fun.”
Creed, in the No. 28 United Rentals Toyota, came home third.
“We were just coasting all day,” said Creed. “A lot of guys were trying to win it in the first 50 laps…crazy. We were just letting them go by. We just let them burn their stuff up. We got in position at the end, put four tires on it. We were really coming…just ran out of time.”
JR Motorsports development driver Josh Berry looked sharp in his first ARCA start, finishing fourth in Chad Bryant’s No. 22 Big Tine Ford.
“This place is definitely a challenge,” said Berry. “You really have to manage tires…you wear ’em out so fast. Feel like you gotta run this place a couple times before you really get on to it. We got a little too tight when we put tires on it. It came down to who was the best in the end. Hope I get the opportunity to come back and try again.”
Chase Purdy finished fifth in the No. 8 Bama Buggies Toyota. Riley Herbst was sixth, followed by Gus Dean seventh, Colby Howard eighth and Brandon Grosso ninth. Chandler Smith was credited with the 10th finishing position, one lap down.
Thirteen lead changes among four drivers kept things busy up front while Chandler Smith led the most with 117 laps led of 200. Eckes was second on the lap leader chart with 72. Five cautions slowed the pace for 40 laps.
RACE RESULTS
The next event for the ARCA Racing Series is the General Tire 200 at Talladega Superspeedway Friday afternoon, April 27, live on FS1.
ARCA PR

Mark Smith Untouchable On Night 2 Of The Hockett/McMillin Memorial