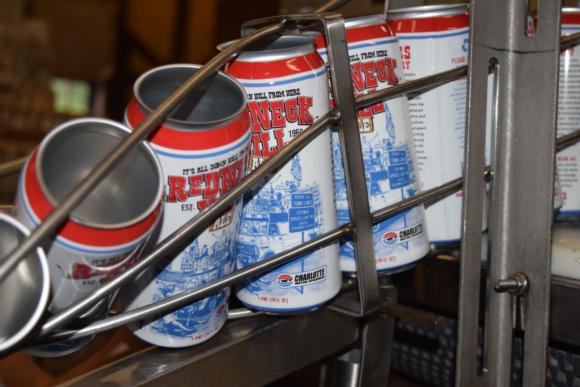 The new craft beer is named for Redneck Hill, the raised spot in the speedway’s infield between turns 1 and 2 which in the 1960s became race fans’ prime spot for watching the race, partying and grilling. Country music legends Willie Nelson and Marty Robbins visited Redneck Hill, as did Pixar executives while they researched the movie that became “Cars.” Redneck Hill’s history as an iconic part of Charlotte Motor Speedway lore enters a new chapter with the craft beer, which will be on sale for just $8 per 16-ounce souvenir can beginning at the NGK Spark Plugs NHRA Four-Wide Nationals this Friday-Sunday.

Redneck Hill will also be available at all major speedway events including the May 19 Monster Energy NASCAR All-Star Race, the May 25 Outlaw Showdown at The Dirt Track at Charlotte and the Coca-Cola 600on May 27.

“Charlotte Motor Speedway is all about experiences. We’re proud to partner with Cabarrus Brewing Company in developing Redneck Hill, a beer that has the ultimate crossover appeal,” said Greg Walter, the executive vice president of Charlotte Motor Speedway. “If you’re a race fan who doesn’t drink many craft beers, you’ll like this. If you’re a craft beer drinker who’s new to racing, you’ll enjoy it just as much. ‘Redneck Hill’ has a lasting legacy with the speedway because it’s where fans have gone to find a great view, some excellent food and the best fellowship. With the release of Redneck Hill, we’ve added the best craft beer to the mix.”

Four-packs of Redneck Hill will be on sale this week at local grocers including Food Lion, Lowes Foods, Harris Teeter and Total Wine.

TICKETS:
Fans can purchase tickets to upcoming speedway events including the April 27-29 NGK Spark Plugs NHRA Four-Wide Nationals at zMAX Dragway and the Coca-Cola 600 on May 27 by shopping online, calling 1-800-455-FANS (3267) or buying them at the gates.