Blue Skies, Temperatures in the 70s and the Greatest Racing Experience on the Planet Awaits Fans, Drivers at Talladega Superspeedway this Weekend 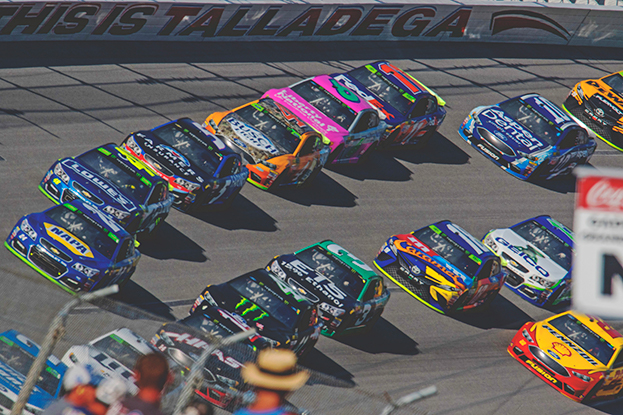 With Chamber of Commerce weather in the meteorologists’ forecasts this weekend, all eyes will be on Talladega Superspeedway as a host of story lines are set to dominate the track’s tripleheader extravaganza, which features the GEICO 500 (Sunday) for the Monster Energy NASCAR Cup Series, the Sparks Energy 300 (Saturday) for the NASCAR Xfinity Series and the General Tire 200 (Friday) for the ARCA Racing Series Presented by Menards. And, great seating options are still available.

For the GEICO 500, can veteran Kyle Busch continue his hot streak after reeling off three consecutive victories entering the event? Can Ford claim its sixth in-a-row at Talladega? Can one of NASCAR’s new group of young talent become the track’s 12th different “first-time winner” in NASCAR’s premier series? And, can Ricky Stenhouse, Jr., back up his 2017 GEICO 500 triumph? Here’s a look at what will be on tap this weekend at the Most Competitive race track – and family-fun experience – on the planet.

This Busch is For You: Kyle Busch adds him name to this list of drivers who come into Talladega with a winning streak of at least three straight races in NASCAR’s premier series. However, no one has been able to stretch the streak at the conclusion of the ‘Dega race. In 1972, the leader of the famed Alabama Gang – Bobby Allison – had reeled off three consecutive heading into Talladega, but wound up third behind victor James Hylton. It was the same result for Rusty Wallace in 1993 as he tried for four-in-a-row, but came up short with a sixth-place effort behind winner Ernie Irvan. In 1987, Dale Earnhardt, Sr., actually claimed four straight and was going for his fifth when he arrived at the 2.66-mile venue. But, it wasn’t in the cards for the track’s all-time winner, falling short behind Davey Allison. Busch does know his way to the winner’s circle, winning the GEICO 500 in 2008.

Lucky No. 12? Young Guns Looking for Win: A host of NASCAR’s Young Guns have yet to go to victory lane in their career, and that first triumph could come at TSS. Stenhouse, Jr. became the 11th driver a year ago to etch his name in the record book as a first-time Cup winner. Names like Brad Keselowski, Davey Allison and Ken Schrader grabbed their initial win at TSS. Some of those who hope to join the fraternity include Chase Elliott, Ty Dillon, Daniel Suarez, Darrell “Bubba” Wallace, Jr., Erik Jones, William Byron and Alex Bowman. A Stenhouse, Jr. repeat win would make him the sixth driver in history to go back-to-back in the GEICO 500. The last to do it? Gordon in 2004-05.

Bridesmaid No More? Before he captured his first career win in NASCAR’s top series, NASCAR Hall of Famer Bill Elliott finished second eight times. After the eighth time, it took him eight races to claim his first career triumph. His son, Chase, now has eight runner-up finishes after his effort last weekend in Richmond, VA. Could he lay claim to his first triumph sooner, perhaps at Talladega, a place where his Dad was iconic with two victories and holds NASCAR’s record speed for qualifying? Well, the numbers are in Chase’s favor. It took his Dad 13 starts to get his first top five at Talladega. Chase accomplished the feat in his first race with a fifth-place finish. It took Bill 17 races for his first TSS pole. Chase did it in his first appearance. Winning? Bill drove to Gatorade Victory Lane in his 17thattempt. Chase makes his fifth start this weekend. His initial numbers are better than his dad’s, but time will tell.

Cream Rises to the Top: The top six in the NASCAR Monster Energy NASCAR Cup standings all have a victory at Talladega – Keselowski leads the way with five while Clint Bowyer has two, and Busch, Logano, Kevin Harvick and Denny Hamlin own one.

Dash 4 Cash Bonus Program: After his victory on Friday night at Richmond, Christopher Bell, along with Sadler, Matt Tifft and Austin Cindric will compete in the Dash 4 Cash NASCAR Xfinity Series Program, gunning for the $100,000 bonus in the Sparks Energy 300.

11 and Counting in General Tire 200: The last 11 General Tire 200 ARCA Racing Series events have seen 11 different winners. In fact, over the last 20 years, there have been 19 drivers go to Gatorade Victory Lane with Frank Kimmel as the lone driver with two victories (2006, 2013). Justin Haley is the defending champion.

ACTION ON AND OFF THE TRACK
“Big One on the Blvd”: On Friday night, NASCAR drivers will parade & oversee fan competitions. This year includes four all-new outrageous fan competitions you’ll have to see to believe.

Traditional Saturday Night Infield Concert: Singer-songwriter Uncle Kracker will perform as the headliner for the traditional Saturday Night Infield Concert. Joining him will be NASCAR favorite Tim Dugger and locally known DJ Mark A.D. from Birmingham, AL. Admission to the SNIC is FREE with a Sunday GEICO 500 ticket, and is scheduled to start at 7:30 p.m. (CDT) at the intersection of Eastaboga and Talladega Blvds.

Kids VIP Experience Presented by Children’s of Alabama: Provides behind-the-scenes access for kids at NASCAR’s biggest track. Open to kids 12-and-younger who have a Pre-Race Pit Pass Upgrade (Each adult must also have a Pre-Race Pit Pass Upgrade) and Sunday race ticket. Kids have the option to choose one experience on a first come, first served basis. The Kids Station behind Pit Road opens at 8:00 a.m. on Sunday before the GEICO 500. (2 Kids per 1 adult limit). Kids can choose one of the following:

SPECIAL OFFERS AND EXPERIENCES
Pre-Race Pit Pass Upgrade: Fan who purchase a Pre-Race Pit Pass Upgrade for only $80 can get an exclusive look at pre-race festivities prior to the GEICO 500. Fans receive a chance to stand stage side at driver introductions, a special area by the red carpet at the entrance to the drivers meeting prior to the race and a first-hand look at the cars lined up on pit road. Additionally, fans will be able to participate in a special Fan Q&A Session (9:15 to 10:45 a.m. CDT) on the start-finish line. Scheduled to appear are: Harvick, Jones, Paul Menard, Byron, Bowman and Luke Lambert (subject to change).

Sunday VIP Experience: Offers fans a chance to witness behind-the-scenes race day happenings prior to the running of the GEICO 500. As part of the unprecedented experience, Motor Racing Network (MRN) Pit Reporter and former driver, Glenn Jarrett, will lead fans on a personal, guided tour of the Monster Energy NASCAR Cup Series Garage, the MRN Broadcast hauler and pit road, while fans listen to the insights via Racing Electronics headsets. Additional benefits include a reserved area near the front of the pre-race stage for GEICO 500 driver introductions, a hot lap in a Grand Marshal car and a Gatorade Victory Lane photo opportunity. The Sunday VIP Experience is $399.

Unrestricted Weekend VIP Package: Provides fans exclusive, up-close access to the garages, pits and other exciting activities at the track throughout the entire race weekend. Fans also receive access to Friday night’s “Big One on the Blvd,” VIP access to the Saturday Night Infield Concert, a reserved area by the red carpet to the drivers meeting entrance, a hot lap in the Grand Marshal car and much more. Fans must be 19 years old to participate. The Unrestricted Weekend VIP Packageis $599.

Military & First Responders AppreciationTickets: For the GEICO 500 and Sparks Energy 300, Talladega Superspeedway is offering special ticket offers for military and first responders (Police Officers, Firemen and EMT’s) and their families:

Teachers & Educators Appreciation: Talladega is thanking educators and faculty members who work within our school districts to shape our youth into outstanding citizens. Those who work in the school system and qualify can save up to 30% off tickets on various ticket options.

College Student Program: College students can purchase a $24 college ticket to attend the entire weekend full of festivities and racing, including the GEICO 500. Others fun activities include:

The VIP Tailgate Experience in The Compound: The brand-new space for the ultimate tailgating experience located just outside of the grandstands behind Legend’s Village hospitality area. A weekend package is just $150 while there are single day options ($100 Sunday; $60 Saturday) available. Includes:

Fanatics Mobile Trailers: Fans looking to “gear-up” to showcase the support of their favorite driver and track can do so by visiting the more than a dozen Fanatics mobile trailers that will be in Talladega Superspeedway’s Fan Zone, which will be open from 8:00 a.m., Friday through Sunday, until the drop of the green flag. Located outside the frontstretch near Turn 4, the mobile trailers include a wide selection for champion drivers as well as the “young guns.” In addition to the Fanatics mobile trailers, Talladega’s Fan Zone will offer families a host of fun, music, as well as dozens of activities and interactive exhibits that showcase a multitude of companies involved in the sport.

NASCAR Xfinity Series Autograph Session: Several NASCAR Xfinity Series drivers will sign autographs on Friday from 4:15 to 5:00 p.m. in Legend’s Village. Guests/Fans will need to pick up wristbands before the session at the main Guest Services Office located at the O.V. Hill South Grandstand Section L. Each Guest/Fan who has a wristband will be guaranteed a spot in the autograph line.

Invocations: Handling the invocation for each of the races this weekend are members of Alabama Raceway Ministries: Jason Falls (General Tire 200), Bill Robertson (Sparks Energy 300) and Mark Stokes (GEICO 500).

For more information on all things Talladega Superspeedway or to purchase tickets for the upcoming race weekend, visit www.talladegasuperspeedway.com or call 855-518-RACE.