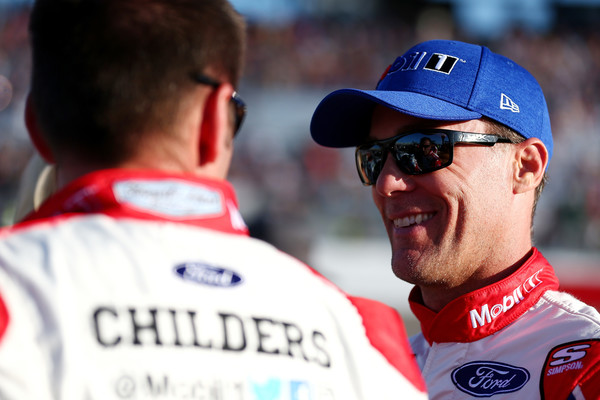 ● The No. 4 Mobil 1 Ford started off fast, with Harvick rising to fifth after 45 laps.

● As the sun began to set and the track cooled, the Mobil 1 Ford became loose and Harvick lost positions.

● Harvick was able to stay among the top-10 through the end of Stage 1.

● Harvick came to pit road for four tires and fuel at the end of the stage. However, a penalty for improper removal of pit equipment forced him back into the pits on the following lap. The team made the most of the second pit stop, making wedge adjustments to the left-rear and right-rear corners of the car.

● Harvick pitted for four tires and fuel at the end of the stage, with a right-rear wedge adjustment.

● Shortly after the stage started, Harvick keyed his mic and said only “Sideways!” After briefly dropping to 11th, he regained 10th on lap 223.

● Harvick made a scheduled, green flag pit stop for four tires and fuel with a left-rear wedge adjustment on lap 274. He came into the pits third and rejoined the race in third.

● Harvick took the lead from Martin Truex Jr. on lap 324 and held it for his next eight tours around the .75-mile oval.

● Harvick made a second, scheduled, green flag pit stop on lap 332 for four tires and fuel. With 50 laps to go, he was third.

● Four caution periods in those final 50 laps conspired against Harvick. Despite having fresh tires, traction and track position were tough to find.

● The final restart sent the race into overtime via a green-white-checkered finish. After restarting in fourth place, Harvick brought his Mobil 1 Ford home in fifth.

●  This was Harvick’s sixth top-five finish of 2018 and his 13th top-five in 35 career Monster Energy NASCAR Cup Series starts at Richmond.

●  Kyle Busch won the Richmond 400 to score his 46th career NASCAR Cup Series victory, his fifth at Richmond and his third of the season, which was also his third straight. His margin of victory over second-place Chase Elliott was .511 of a second.

●  There were six caution periods for a total of 46 laps.

Kevin Harvick, driver of the No. 4 Mobil 1 Ford Fusion for Stewart-Haas Racing:

“We were terrible on the restarts compared to three or four of those guys. I was spinning the tires getting going on the restarts. All of the night taken into consideration, we were way better than we have been in the past, and that is an important race for us to figure out where we need to be with all of the things that didn’t go right tonight. We want to be ready for when we come back here for the playoff race.”

The next event on the Monster Energy NASCAR Cup Series schedule is the Geico 500 April 29 at Talladega (Ala.) Superspeedway. The race starts at 2 p.m. EDT with live coverage provided by FOX beginning with a pre-race show at 1:30 p.m.