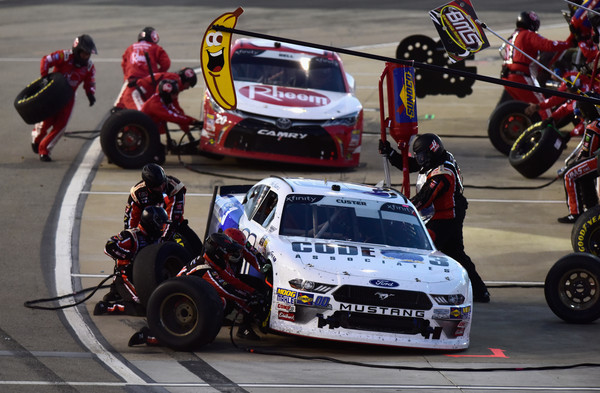 ● Custer held the Code 3 Associates Ford in the lead for the first 43 laps of Stage 1.

● After a lap-64 caution, Custer restarted fourth and moved up to third before the stage ended.

● He pitted for four tires and fuel at the conclusion of the stage.

● Five cars pitted before the conclusion of Stage 1, putting Custer in the eighth position.

● Custer was caught in traffic on the restart and noted loose-handling conditions when he got back to the gas.

●Custer took four tires, fuel and air pressure adjustments at the conclusion of the stage.

● During the pit stop at the end of Stage 2, the No. 00 team received a penalty for an uncontrolled tire and forced Custer to the rear of the field.

● Custer continued to wheel the Code 3 Associates Ford through the field and fought his way up to sixth when the race concluded.

● This marks Custer’s second Xfinity Series top-10 at Richmond and sixth straight top-10 of the season.

● No NASCAR Cup Series drivers were entered in the Richmond 250.

● Christopher Bell won the Richmond 250 to score his second career Xfinity Series victory, first of the season and first at Richmond. His margin of victory over second-place Noah Gragson was .423 seconds.

Cole Custer, driver of the No. 00 Code 3 Associates Ford Mustang for Stewart-Haas Racing With Biagi-DenBeste:

“We had such a fast car. At the start of the race we were really good and then the middle stage we were a little bit off. We made the Code 3 Associates Ford pretty good there at the end, but we got that penalty, which I guess was a little bit of a close call. We’ll look at it but it’s just frustrating because I think we had a really good car. I’ve got to thank everybody at Code 3 and hopefully come back better next time.”

The next event on the NASCAR Xfinity Series schedule is the Sparks Energy 300 on Saturday, April 28 at Talladega (Ala.) Superspeedway. The race starts at 3 p.m. EDT with live coverage provided by FOX.