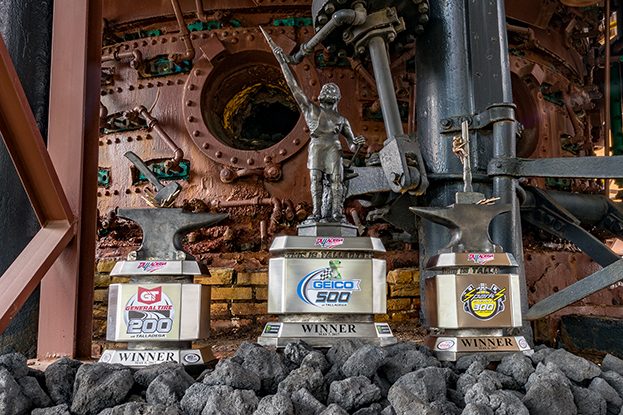 Hardware to winners of races at Talladega Superspeedway? No. At the biggest, baddest racing venue on the planet, it is called ironware!

Every driver who straps themselves behind the wheel at the 2.66-mile track dreams of winning at the historic, gigantic venue and a trip to Gatorade Victory Lane. And, to the victor of Talladega’s upcoming races during its tripleheader motorsports weekend (April 27-29), go the spoils – some of the most unique pieces of authentic ironware in all of motorsports with both the Vulcan Trophyand the Hammer & Anvil Trophy.

Symbolic of Talladega with its bold toughness, the Vulcan Trophy will be handed over to the winner of the Sunday, April 29 GEICO 500 Monster Energy NASCAR Cup Series race. Standing nearly three-feet tall and weighing over 100 pounds, the handmade trophy created with hot-poured iron is a miniature version of colossal Vulcan, the world’s largest cast iron statue (56-foot structure on a 124-foot platform) that overlooks the nearby city of Birmingham, once one of the nation’s leading iron and steel producers. The statue, which pays homage to the god of fire in Ancient Roman myth, is considered one of the most memorable works of civic art globally, and is a part of the Vulcan Park & Museum (www.visitvulcan.com).

Each individual Vulcan trophy, which stands on its one-of-kind base, is handcrafted by the metal arts division of Birmingham’s Sloss Furnaces (www.slossfurnaces.com/metal-arts). Since its inception, Joey Logano, Ricky Stenhouse, Jr. and five-time ‘Dega winner Brad Keselowski have claimed the trophy in Gatorade Victory Lane.

The Hammer & Anvil Trophy, also produced by Sloss, is a 30-inch, 50-pound plus work of art which debuted in May last year and is awarded in other Talladega Superspeedway races, including next weekend’s Sparks Energy 300 for the NASCAR Xfinity Series (Saturday, April 28) and the General Tire 200 for the ARCA Racing Series Presented by Menards (Friday, April 27).

Myth has it that Vulcan worked in a forge, used an anvil and hammer to shape the metal and create weapons and armor for the all the gods. It, too, is hot-iron poured and features a large hammer and anvil on a strong base. The Hammer & Anvil Trophy for the Sparks Energy 300 has its own, special twist in the fact it depicts a power lineman on the hammer. Aric Almirola won last year’s Sparks Energy 300 while Justin Haley took the checkers in the General Tire 200.

While the Vulcan and Birmingham are forever linked together, Talladega Superspeedway also has a history with the two dating back decades. In 1969, one month after the running of the first NASCAR race at NASCAR’s Most Competitive track, the ARCA series took the mammoth speedway in the Vulcan 500, and Jim Vandiver grabbed the checkered flag. A year later, Ramo Stott was victorious in the second Vulcan 500.

In addition to the Vulcan Trophy, Sunday’s winner in NASCAR’s premier series will take home the patriotic Freedom Trophy, a staple of Talladega’s steeped military tradition. The trophy, introduced in the spring of 2014, will be presented by United States Navy Commanding Officer at Naval Air Station Pensacola, Captain Christopher T. Martin.

To see who takes home the coveted trophies, visit www.talladegasuperspeedway.com or call 855-518-RACE (7223) for all ticket information.