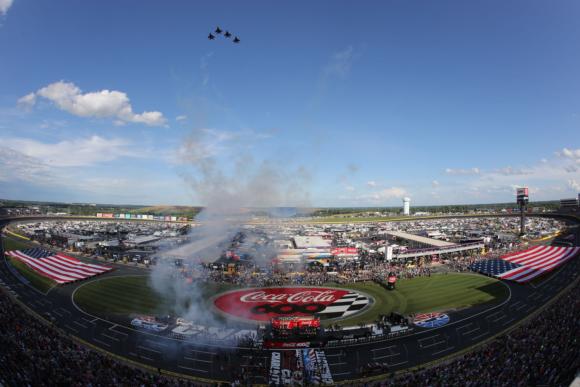 Charlotte Motor Speedway will incorporate all five branches of the U.S. Armed Forces in an unprecedented, spectacular pre-race Salute to the Troops before the 59th running of the Coca-Cola 600 on May 27.

This year’s edition of the Memorial Day weekend celebration will highlight the Department of Defense’s “This is Your Military” initiative by paying tribute to each of the military branches, featuring special guests and showcasing vehicles and awe-inspiring displays of military prowess from the U.S. Army, the U.S. Marine Corps, the U.S. Navy, the U.S. Air Force and the U.S. Coast Guard. Fans and drivers will also get to #KnowYourMil through interactions with service members.

On race day, fans will be treated to aerial thrills and ground-shaking firepower as F-15 fighter jets and Blackhawk helicopters with a rappel team join Howitzers and Humvees in touring the iconic 1.5-mile superspeedway before NASCAR’s biggest stars take the green flag.

“Charlotte Motor Speedway has a proud history of saluting our great nation’s armed forces, but this year’s pre-race show will be the biggest, most incredible one we’ve ever had,” said Greg Walter, the executive vice president of Charlotte Motor Speedway. “We’re thankful that so many of our local service members join us each year at America’s Home for Racing to witness the awesome display of patriotism and racing excitement. Like the giant American flag we’ll have at the race, I can’t wait to see it unfold.”

In conjunction with the U.S. Department of Defense, Charlotte Motor Speedway is executing “Mission 600,” a series of visits by NASCAR drivers to regional military bases as a prelude to the Memorial Day weekend Salute to the Troops at the Coca-Cola 600. Among the drivers tentatively scheduled to appear are Brad Keselowski, the driver of the No. 2 Miller Lite Ford Fusion, at Naval Station Norfolk on April 19. Austin Dillonand the No. 3 Chevrolet Camaro ZL1 pit crew will visit Fort Bragg on April 26, and Alex Bowman and the No. 88 Nationwide Chevrolet Camaro ZL1 pit crew will visit U.S. Coast Guard Station Wrightsville Beach on May 3. Darrell “Bubba” Wallace, the driver of the No. 43 U.S. Air Force Chevrolet Camaro ZL1, will head to Seymour Johnson Air Force Base on May 9. An additional visit to Marine Corps Base Camp LeJeune is in the planning stages.

Drivers will learn about the inner workings of daily life in the U.S. Armed Forces through military training, exercises, facility tours and meetings with the men and women who bravely serve.

Through the speedway’s “Patriot Partners” program, race fans or corporate customers can buy a Coca-Cola 600 race ticket for a member of the U.S. Armed Forces for just $25.