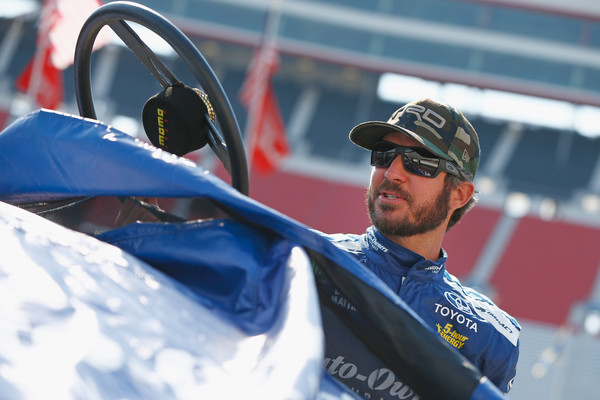 Martin Truex Jr. will make his 450th career NASCAR Cup Series start in Saturday night’s Toyota Owners 400 at Richmond Raceway.
“That’s crazy how time flies,” said Truex when he was told that Richmond will be his 450th career start. “Just seems like yesterday we were making preparations to run our first Cup races.
“I feel fortunate to be competing at the highest level of stock car racing, thanks to everyone who has helped and supported my career along the way. I am still having plenty of fun and feel I have more good years left in me.”
The 37-year-old Mayetta, N.J. native ran nine Cup races before joining NASCAR’s elite series full time in 2006. He made his debut Oct. 31, 2004 at Atlanta Motor Speedway, starting 33rd and finishing 37th.
And like a fine wine, Truex has gotten better with age, especially since joining Furniture Row Racing in 2014.
After a sub-par season with the Denver, Colo.-based team in 2014 (ranked 24th in points), he made a huge leap the following year, qualifying as one of the final four participants for the season championship.
Truex came back in 2016 scoring four wins and another playoff berth. Last year he reached NASCAR’s pinnacle, winning the NASCAR Cup Series championship after claiming eight victories.
His career totals entering Richmond include: 449 starts, 16 wins, 72 top fives, 165 top 10s, 17 poles and 6,662 laps led.
Truex’s pre-Furniture Row Racing record included 297 starts, two wins, 31 top fives, 90 top 10s, seven poles and 1,889 laps led.
His Furniture Row Racing record includes 152 starts, 14 wins, 41 top fives, 75 top 10s, 10 poles and 4,773 laps led.
“It’s been a good ride so far, especially the past couple of years,” Truex noted. “I am surrounded with a talented and committed team. We all feel the same — once you taste a championship you want to taste it again and again.”
Truex, who will drive the No. 78 Bass Pro Shops/5-hour ENERGY Toyota at Richmond, is looking to make his 450th career start memorable, and at the same time, seeking redemption at the 0.75-mile short track.
In his last visit to Richmond (September 2017), Truex saw victory snatched away after a controversial caution came out with three laps remaining. He had a comfortable three-second lead when NASCAR called a caution for the No. 15 car brushing the wall.
“We were the class of the field last fall in Richmond,” said Truex, who led a race high of 198 laps. “That caution was sure costly, and then we got beat out of the pits on that final stop. Our car was never good on restarts all night long so we were kind of a sitting duck.
“After what we have gone through the past two weeks (accidents in both Texas and Bristol), a Richmond redemption would give us a big lift.”
Regarding Richmond Raceway, Truex says it’s a difficult venue but yet his favorite of the three short tracks on the NASCAR Cup Series circuit.
“Richmond is definitely a tough track,” Truex said. “But at the same time it’s at the top of my list for short tracks probably because I have had more success there than at the other short tracks. I guess I just figured out Richmond earlier and that’s why I feel comfortable racing there. It’s kind of like the short tracks I grew up on.”
Truex’s career record at Richmond Raceway includes 24 starts, two top fives, eight top 10s and 439 laps led.  His average start is 14.8 and average finish is 20.0.
FRR PR/Photo Matt Sullivan/Getty Images