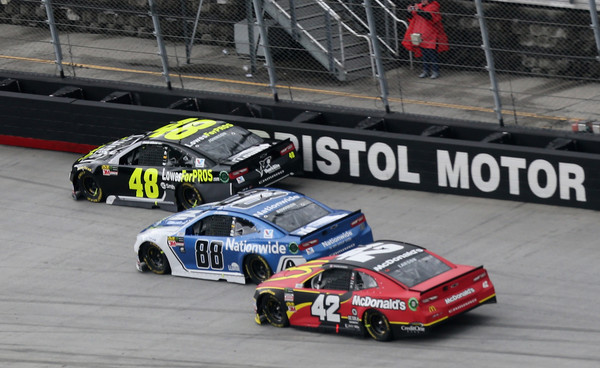 After completing 204 circuits around the 0.526-mile Bristol Motor Speedway (BMS) on Sunday, the race was suspended due to weather.  The eighth Monster Energy NASCAR Cup Series race of the season resumed on Monday amid threatening snow, sleet and rain.  Despite all those factors and an on-track spin while leading, Kyle Larson piloted his No. 42 McDonald’s Camaro ZL1 to a runner-up finish.  Larson came just shy of collecting his first win at ‘The Last Great Coliseum’, but his machine became too loose in the closing laps to hold the top spot.  Larson led a race-high 200 laps and it was his fifth top 10 finish in nine races at BMS and fourth top 10 finish of the 2018 season.

“The No. 42 McDonald’s Camaro ZL1 was really, really good on that long run,” said Larson after the race.  “And yeah, as soon as we restarted there, I was extremely loose. The No. 17 (Ricky Stenhouse) got to my inside. I just really didn’t have any grip. I thought it would tighten-up for me and I could get going, but it never really did and I was just really loose. I hate that I didn’t win. It’s another one at Bristol. I feel like every time I race here I almost get a win. It was a fun race. I’ve been beat by Kyle (Busch) about every time I race here, too; so that gets frustrating after a while.”

Darrell ‘Bubba’ Wallace, Jr. led the first Cup Series laps of his young career late in the event but had a handling issue that relegated him to 16thin the final finishing order.  Wallace, Jr. still ended the day as the highest finishing rookie.

Kyle Busch (Toyota) was the race winner and Ricky Stenhouse, Jr. (Ford) finished fifth to round out the top five finishers.

Next week the series heads to another short track, Richmond Raceway for the ninth race of the 2018 season.  The Toyota Owner’s 400 begins at 6:30 p.m., ET on Saturday night.

THE MODERATOR:  We are joined by our second‑place finisher, Kyle Larson, driver of the No. 42 McDonald’s Chevrolet.  Kyle, just oh, so close.  Why don’t you take us through that battle there with the 18 at the end?

KYLE LARSON:  Yeah, I was just checked out there that long run.  It was really, really good there, and was just hoping it would go green until the end, and then we pitted, and I was actually fine with that, too, because I knew we’d leave as the leader and restart on the outside.  I just didn’t expect to get that loose that run there.  The 17 almost got by me, was able to hold him off.  I thought the grip was getting better, which it did a little bit, but not nearly good enough.

Not sure if the track changed a lot there or what, but I lost the balance on the car.

Q.  I know you mentioned you got really loose at the end there.  After Kyle bumped you.  Did you think you were going to be able to get back to him, or how was the feeling of the car after he bumped you?

KYLE LARSON:  I knew it would be hard to get back to him.  I knew I would need a lapper to kind of hold him up on exit and kill his momentum to allow me to maybe get back to his bumper, but there just weren’t a whole lot of cars left out there.

THE MODERATOR:  We are joined by our third‑place finisher, Jimmie Johnson, driver of the No. 48 Lowe’s for Pros Chevrolet.  Pretty strong run out there, I guess, yesterday and today.  Why don’t you take us through it briefly?

JIMMIE JOHNSON:  Yeah, definitely a strong race car.  We’ve been talking about our cars performing better and driving better and creating speed the last three weeks or so, but to finally back it up with a solid finish is exactly what we needed.  And to see my teammates with positive comments about their cars the last few weeks and some good results yielding from all of that, we definitely have it rolling in the right direction.

And specifically, on the 48, last weekend there was a lot of excitement with the speed in our car, but we just had some bad luck on track and on pit road and a variety of things that went on.  And to really be so buttoned up on race calling, pit stops, what I did in the car, the whole thing, I really feel like we’re rolling in the right direction now.

Q.  Jimmie, you mentioned how once you get one of these under your belt, it feels like things start to carry up a little bit.  How real is that, or is it just talk, or does it actually give you real confidence and momentum going forward?

JIMMIE JOHNSON:  Yeah, I think most situations momentum does carry you up or down.  If things seem to be going wrong, they continue for a while.  Sometime it’ll turn around, you just don’t know when.  And I think in most cases, you’re right.  I have experienced it in my career where we have had different dry spells, and we’ll get the car going well, and I’ll make a mistake, or the car going well and we have a bad pit stop, or just unlucky, and it takes a little while ‑‑ I can’t explain why or how, but it takes a little while to get the momentum rolling in the right direction, and I think today was ‑‑ the last two days was a big step in the right direction for us.

JIMMIE JOHNSON:  Yeah, I felt like the ‑‑ probably about the 40‑ or 50‑lap mark, the top would start to come in, and the long green flag run we had, I guess, two runs from the end, it was working pretty good up there.  I just think on the short run and as cold as it is, there’s just enough grip to use the shortest way around to create lap time.  Once the tires wore enough, then you’d move up.  But if you put us in yesterday’s temperatures, I think we would have been up higher a lot sooner.