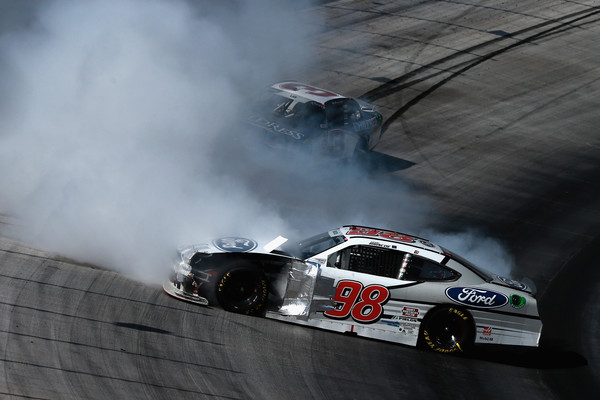 ● No. 98 suffered significant left front and right-side damage in an accident on lap six.

● He drove to 18th before the lap-45 competition caution.

● Briscoe drove several laps with a dash panel blocking most of his view through the windshield. He later told the crew, “That was full on Ricky Bobby” referring to the NASCAR movie “Talladega Nights.”

● No. 98 crew continued to make repairs during the break between Stages 1 and 2.

● Briscoe dodged several accidents and climbed to 15th by lap 105.

● Moved into 10th on the final lap of the stage.

● Did not pit during the stage break and started the final stage in first.

● Spun after contact with Daniel Hemric on lap 185. Pitted for repairs and dropped to 21st.

● Damage was too great to maintain previous speed and lost laps to the leader on lap 217 and 238.● A cut tire on lap 258 dropped him five laps behind the leader.

● Briscoe earned a stage point by finishing 10th in the second stage.

● Twelve cautions slowed the race for 93 laps with only 12 of the 40 drivers finishing on the lead lap.

● Ryan Preece won the Fitzgerald Glider Kits 300 to score his second career Xfinity Series victory. It was his first in 2018 and first at Bristol. His margin of victory over second-place Justin Allgaier was .856 seconds.

Chase Briscoe, driver of the No. 98 Ford Mustang for Stewart-Haas Racing With Biagi-DenBeste:

“We got that damage on whatever lap it was and after that we were just biding our time and trying to make the best of the day. I felt like we honestly weren’t bad. I’m really proud of all the guys. They kept fighting all day long. They could have easily given up, but they continued to fight, so, overall I’m happy.”

The next event on the NASCAR Xfinity Series schedule is the Richmond 250 on Friday, April 20 at Richmond (Va.) Raceway. The No. 98’s next race is the Sparks Energy 300 on Saturday April 28 at Talladega (Ala.) Superspeedway with Briscoe behind the wheel.