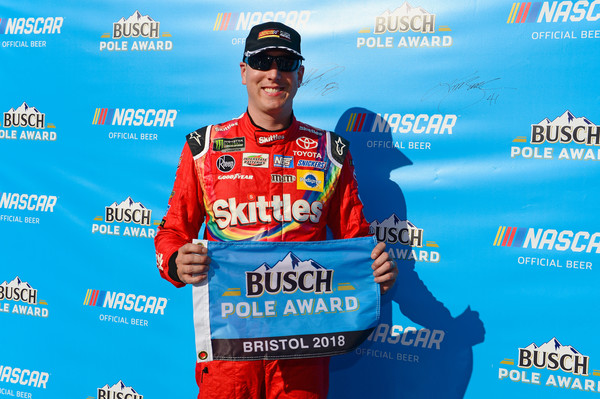 Kyle Busch edged older brother Kurt Busch on Friday to win the pole for the Food City 500.  It is the third time in their Monster Energy NASCAR Cup Series careers that the Busch brothers have swept the front row for a race. Kyle also scored the pole the two previous times.

“He always told everybody, ‘If you think I’m good, wait for my younger brother,’” said Kyle, who drives the No. 18 Joe Gibbs Racing Toyota. “I’m glad I’m living up to it.”

The Busch brothers are no strangers to success at Bristol Motor Speedway.

“Super close,” said Kurt, who drives the No. 41 Stewart-Haas Racing Ford. “You have to hit it just right at Bristol because the lap times are below 15 seconds. Any little miss and you know you’re not going to get the pole because there’s no time to gain it back. It’s real similar to drag racing. It’s a quarter-mile long and any time you have one little slip you don’t have time to gain it back. Except here, it’s just two quarter-miles. I slipped up just a little bit in Turn 1 and that was all that Kyle needed to get by us.”

Qualifying proved to be an exercise in gamesmanship.

NASCAR splits qualifying into three timed rounds, whittling down the contenders to a final group of 12 that vies for the pole position. On Friday, teams opted to wait for several minutes before sending their drivers onto the track to make their qualifying runs.

Nobody wanted to be the first to drive on the traction compound, Kurt Busch explained. That made for hectic finishes to each round.

Kyle Busch lead Round 1 of qualifying followed by his brother and Kurt Busch led Round 2 followed by Kyle.

“I was not real sure we were going to be able to get there (at the end),” said Kyle Busch, who leads the series’ points standings through seven races and is coming off a victory last week at Texas Motor Speedway. “Our guys did a great job here today bringing a fast Skittles Camry to the track and just making some good adjustments there to it through the qualifying rounds and making sure we were staying on top of things. We got a little bit tight there in the final round but was able to still maintain a quick enough speed in order to beat Kurt out.”

In the end, Ford placed seven cars in the top 10, including Team Penske’s three entries. Brad Keselowski qualified third in the No. 2 Ford. Ryan Blaney qualified fifth in the No. 12 Ford and Joey Logano qualified 10th in the No. 22 Ford. Ricky Stenhouse Jr. earned a season-best fourth place starting spot in the No. 17 Roush Fenway Racing Ford.

Denny Hamlin holds the series’ qualifying record at Bristol, lapping the track at 131.668 mph in 2016, but was not among the 24 fastest cars and did not advance out of the first qualifying round. He will start 25th in the No. 11 Joe Gibbs Racing Toyota.

Kevin Harvick and the No. 4 Stewart-Haas Racing Ford team opted not to attempt a qualifying run. In the lone practice session earlier in the day, Harvick hit the Turn 3 wall and the team was forced to pull out its backup car. He will start at the rear of the field in the Food City 500.

Gragson, driver of the No. 54 Switch Toyota, ran a top lap of 15.159 at 126.578 mph. The goal now is to translate the pole win into a race victory on Saturday ahead of his Xfinity Series debut.

“I didn’t think it was going to be that good and then they told me to shut it down, so I figured I had something good,” Gragson said. “Hey we’re on the pole, that’s awesome. I’m excited. In my short career, I’ve learned you’re only as good as your last time out on the track. (Saturday) is a new day. We can’t hang our hats on what we qualified because those guys are hungry. There’s a lot of good drivers with a lot of experience. Just have to keep that confidence going as much as I can, but we still have to work hard.”

Tyler Dippel will join Gragson on the front row for Saturday’s race at Bristol.

Gragson, who also runs in the NASCAR Camping World Truck Series for Kyle Busch Motorsports, was strong throughout Friday, capping it off with an impressive performance in qualifying. A big key for Gragson has been leaning on the expertise of Busch, who has won at Bristol 20 times over the top three NASCAR series.

“He’s helped me quite a bit, just little things,” Gragson said. “All the knowledge I gained in the past year working at Kyle Busch Motorsports I put in that lap.”