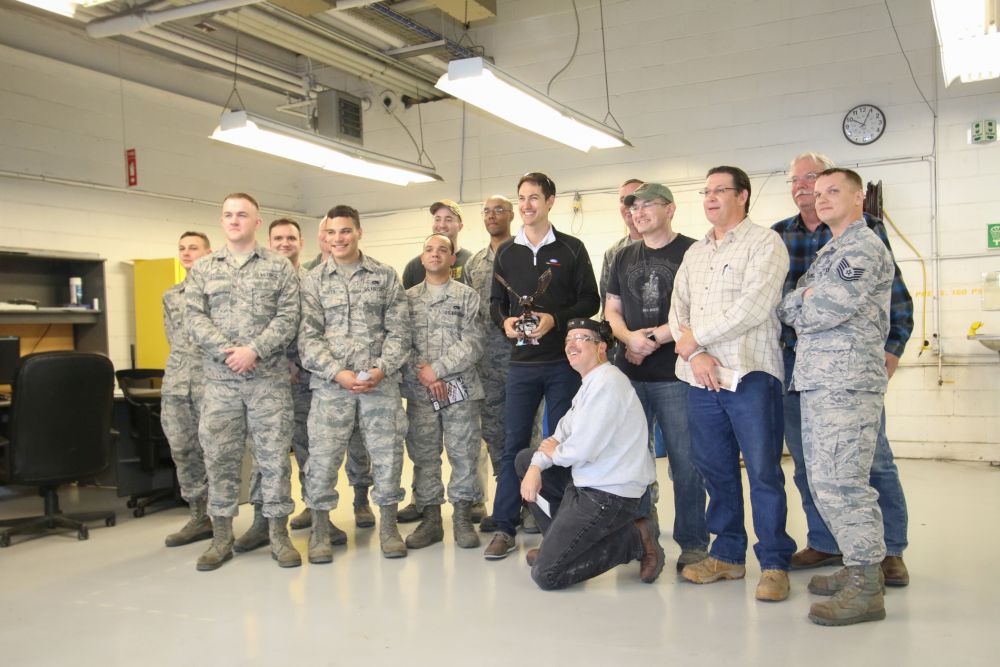 Joey Logano, a 2018 Monster Energy NASCAR Cup Series championship contender, greeted hundreds of active-duty military members and learned about the daily duties and mission of the U.S. Air Force during a tour of Dover Air Force Base on Wednesday.

The visit by the driver of the No. 22 Ford Fusion for Team Penske came as the Monster Energy NASCAR Cup Series prepares to return to Dover International Speedway for the “AAA 400 Drive for Autism” on Sunday, May 6 (FS1, 2 p.m.). Logano is in second place in the Monster Energy NASCAR Cup Series point standings, 38 points behind leader Kyle Busch and 13 points ahead of Ryan Blaney in third.

Dover Air Force Base, the largest aerial port in the U.S. Department of Defense, is home to 3,900 active-duty military personnel and 1,100 civilian workers. Logano’s visit included tours of several facilities, including the sheet metal fabrication factory and supply port, as well as the opportunity to try on aircrew flight equipment and feel the brunt of an attack from a military working dog (while wearing heavy padding, of course).

“We all see the flyovers that take place before the races,” said Logano. “To have the chance to be able to shake some hands today and say thank you is a special opportunity.

“It’s amazing to see how well everybody works together. It’s a really good reminder that sometimes we all take our freedom for granted. To come here and learn more, you realize how much goes into it.”

At each stop, Logano took pictures and signed autographs for airmen and asked questions about their daily routines and schedules. During lunch, Logano ate with some of his biggest fans who work on the base, and he also chatted with Col. Ethan C. Griffin, commander of the 436th Airlift Wing.

“It’s fantastic to be able to show what we do here at the base,” Griffin said. “It’s nice that our airmen have the chance to let their hair down a bit, have some fun and demonstrate how they fulfill their mission each day.”

Dover International Speedway President and CEO Mike Tatoian also serves as chairman of USO Delaware’s advisory council. In that capacity, Tatoian works closely with Dover Air Force Base officials to provide services to all military personnel, and their families, throughout The First State.

“I know the airmen appreciate it when a professional athlete takes an interest in what they do on a daily basis,” Tatoian said. “It’s important for the morale of the airmen and it’s because of what they do every day that he’s able to do what he does in his profession.”

“It’s a challenging track for everyone,” Logano said of Dover. “It’s probably the most physically demanding track we go to. You’re in the corners as much as you’re in the straightaways.

“I have some little Miles trophies at home. Hopefully, I’ll bring the big one home soon.”