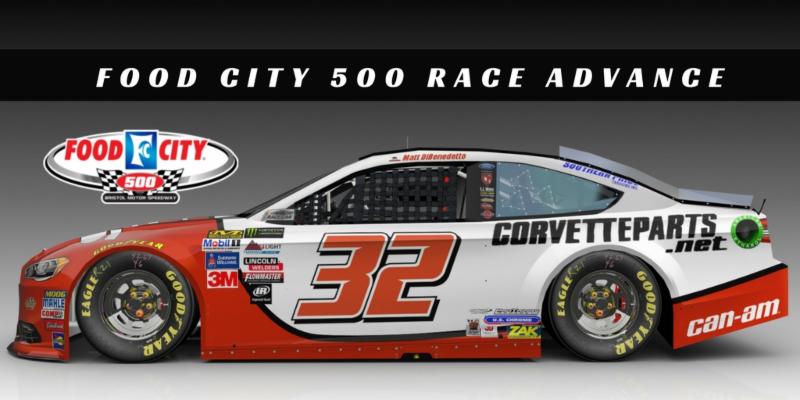 After a season-best finish at Texas Motor Speedway, the Go Fas Racing team and the No.32 CorvetteParts.net Ford is hoping to continue their streak of strong finishes as they head into Bristol Motor Speedway this week. Bristol, known as “The World’s Fastest Half-Mile” and “The Last Great Colosseum”, is an exciting high-banked 0.5-mile racetrack based in Bristol, Tennessee.
Di-Bristol-detto:
When asked about his favorite racing memory, DiBenedetto often points to Bristol Motor Speedway. In 2016, DiBenedetto took the NASCAR community by surprise when he finished sixth at the high-banked oval. The race winner Carl Edwards even made a point to acknowledge DiBenedetto in his post-race interview when he saw where Matt had finished.

“They finished sixth?” Edwards asked, incredulous. “Man that’s unbelievable. That’s probably tougher than what we did.”

While many things have changed for DiBenedetto since then, Bristol will always have a special place in his heart and much of his team from 2016 still surrounds him. Known for being a “drivers-track”, Bristol holds DiBenedetto’s best average finish amongst all NASCAR Cup Series tracks with an average of 20th in his six starts. The CorvetteParts.net team will look to better that average with another top-20 finish this weekend.
Last Week for the No.32 Team:
After an off-week for Easter, the Monster Energy NASCAR Cup Series was in Texas for the O’Reilly Auto Parts 500. Crew Chief Randy Cox and Matt DiBenedetto worked through several practices to find a balance on the Can-Am / Wholey’s Ford and qualified 30th-quick. The 1.5-mile race track had just been repaved a little over a year ago, and still had a very narrow racing groove.
With a narrow racing groove, drivers were forced to race hard on restarts without giving an inch. Many big incidents took place, which DiBenedetto avoided several times, and moved into the top-20. With a well-handling racecar and good strategy from Crew Chief Randy Cox, DiBenedetto found himself finishing 16th at the end of 500 miles of racing.
DiBenedetto on Bristol Motor Speedway:
“It’s so cool being able to head to Bristol (Motor Speedway). I kind of feel like my career was made here, and that this is the place that finally put me on the map for a lot of people. I’m still reminded every week of my sixth place finish (from 2016). This place brings back a lot of good memories and we always seem to run well here. I’m excited to work with Randy Cox this weekend and see what kind of magic we can work together.”
Matt DiBenedetto Career Monster Energy NASCAR Cup Series Stats at Bristol Motor Speedway:
Starts: 6
Average Start: 29.7
Average Finish: 20.3
Best Finish: 6th (2016)
Go Fas Racing PR