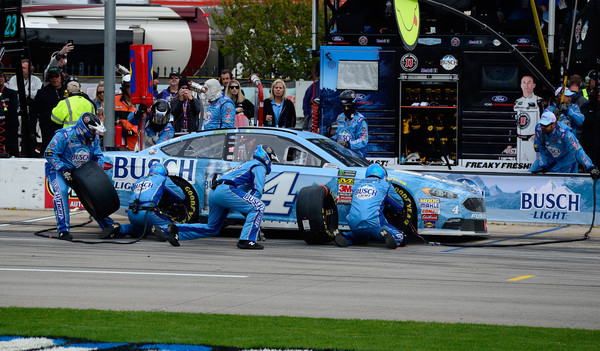 ● The No. 4 Busch Light Ford took the lead on the first lap.

● Harvick held the lead until coming to pit road for a green-flag pit stop on lap 44.

● The No. 4 Busch Light Ford reclaimed the lead on lap 56 and held it for the remainder of the stage.

● Harvick came to pit road for four tires and fuel at the end of the stage, but he came off pit road in the second position.

● Harvick passed Kyle Busch for the lead on lap 118.

● The No. 4 Ford came to pit road under caution for four tires and fuel, but a lug nut got lodged in the jack and slowed the stop.

● Harvick restarted ninth and immediately reported a loose wheel, which caused the team to make an unscheduled pit stop under green.

● The No. 4 Ford fell to the 22nd position, one lap down to the leaders, following the unscheduled stop.

● Harvick battled back to finish 15th by the end of the stage but fell one spot short of the free-pass position.

● The Busch Light Ford came to pit road for four tires and fuel at the conclusion of the stage.

● The Busch Light Ford restarted 14th, but a quick caution at the start of the final stage allowed Harvick to advance to 12th.

● The No. 4 car returned to the lead lap on lap 235 after a caution flag flew before his scheduled pit stop.

● Harvick came to pit road under the caution from the second position for four tires and fuel on lap 237.

● The Busch Light Ford restarted second with 25 laps remaining and battled for the win in the closing laps.

● Harvick won Stage 1 to earn 10 bonus points and one playoff point. Harvick led three times during the race for 87 laps and has now led 318 laps at Texas.

● Kyle Busch won the O’Reilly Auto Parts 500 to score his 44th career Cup Series victory, his first of the season and his third at Texas. His margin of victory over second-place Harvick was .3 of a second.

Kevin Harvick, driver of the No. 4 Busch Light Ford Fusion for Stewart-Haas Racing:

“We did overcome a lot. That was unfortunate. We had a pathetic day on pit road, two days on pit road because of pit guns. When you have a pit gun problem like we have multiple times and been able to overcome it and then today we couldn’t overcome it. Time after time you can’t get the lug nuts tight because the pit guns don’t work.”

The next event on the Monster Energy NASCAR Cup Series schedule is the Food City 500 on April 15 at Bristol (Tenn.) Motor Speedway. The race starts at 2 p.m. EDT with live coverage provided by FOX TV, PRN and SiriusXM Radio.