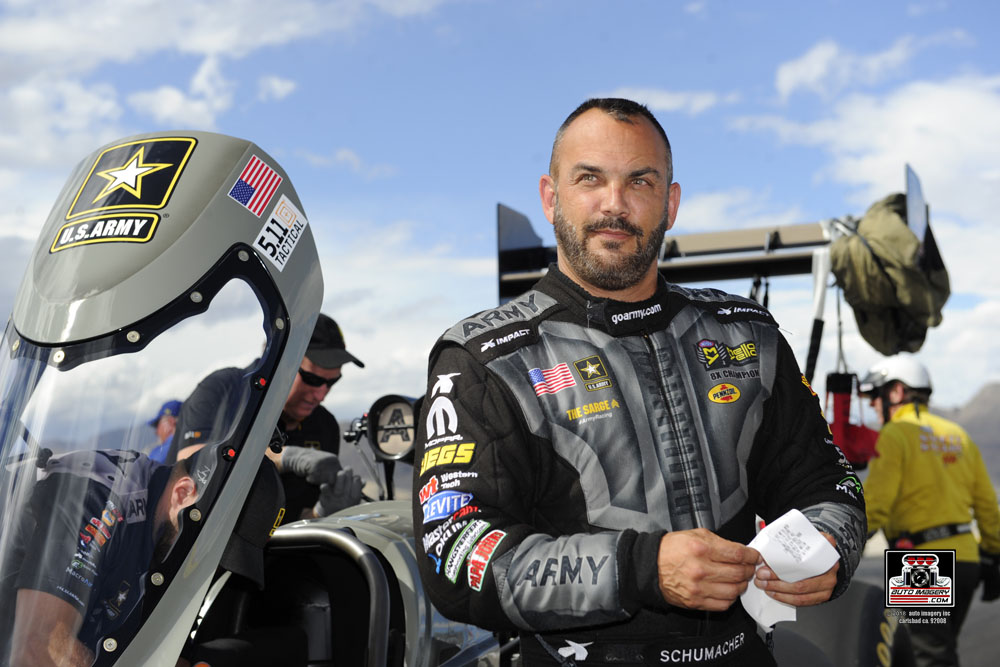 The most successful Top Fuel driver in NHRA history picked up his 86th No. 1 qualifier during the inaugural NHRA Four-Wide Nationals at Las Vegas Motor Speedway on Saturday afternoon. Tony Schumacher’s 3.765-second at 328.46-mph Q4 run boosted the U.S. Army driver to the top and earned him his second pole of 2018.

Schumacher made two solid qualifying runs during the first three sessions, finishing Friday sitting in fourth, and picking up a bonus point in Q3 for running a ‘top three’ pass. In the final qualifying session of the weekend, Schumacher and the U.S. Army Top Fuel team threw down the gauntlet and made their monster Pennzoil-powered 3.765-sec pass. The run boosted Schumacher’s Las Vegas pole tally to four at the Spring event, and 11 overall. It also marks the 150th time in his career that he will start Sunday from either the No. 1 or No. 2 qualifying position.

The team, which saw the addition of crew chief Mike Neff over the off-season, is off to a solid start, having already made a final round appearance in 2018. Schumacher’s confidence in his team’s abilities to end the inaugural West Coast four-wide event in the Winner’s Circle is apparent.

“Believe it or not, we brought Mike [Neff] in to get ‘off track.’ His job was to come in and stir the pot up; change what we had. We had a good car that made good runs, but we needed to make great runs like we did today,” said the eight-time Las Vegas winner.

“I love that my crew chief makes a decision when we’re one pair back to change the clutch. He sees whatever he sees, and he digs in there and makes a small change and it does what he says. So many times, crew chiefs will do that and it will go out and struggle. Mike’s really good, when he sees that he needs to make a change and he does, the car responds.

“It’s fun right now, and we have a great car. Every given Sunday, I wake up and think ‘this could be the day. We have a chance to win this.’”

Schumacher’s No. 1 qualifying position gives him the advantage of lane choice in his Steve Chrisman-Scott Palmer-Terry McMillen-round one matchup, but the eight-time Top Fuel champion believes his team has a fighting chance, regardless of where they had finished in qualifying.

“I don’t care where we start from right now. I’m comfortable racing with Mike. I’m comfortable racing with Phil, the car’s running good, and we’re going to go out there and try and win tomorrow. It’s not going to be easy. There are great cars and great teams that are running 76’s, 77’s, 78’s. We’ve just got to get down the track first or second in the first two rounds and then win the third round.

“Bruton [Smith] did an amazing job building this race track so the fans can pile in. We want to go out and win this inaugural event, we’ve had some great luck at inaugural races, and I want to continue that success.”

The Competition:
No. 8 Scott Palmer
No. 9 Terry McMillen
No. 16 Steve Chrisman