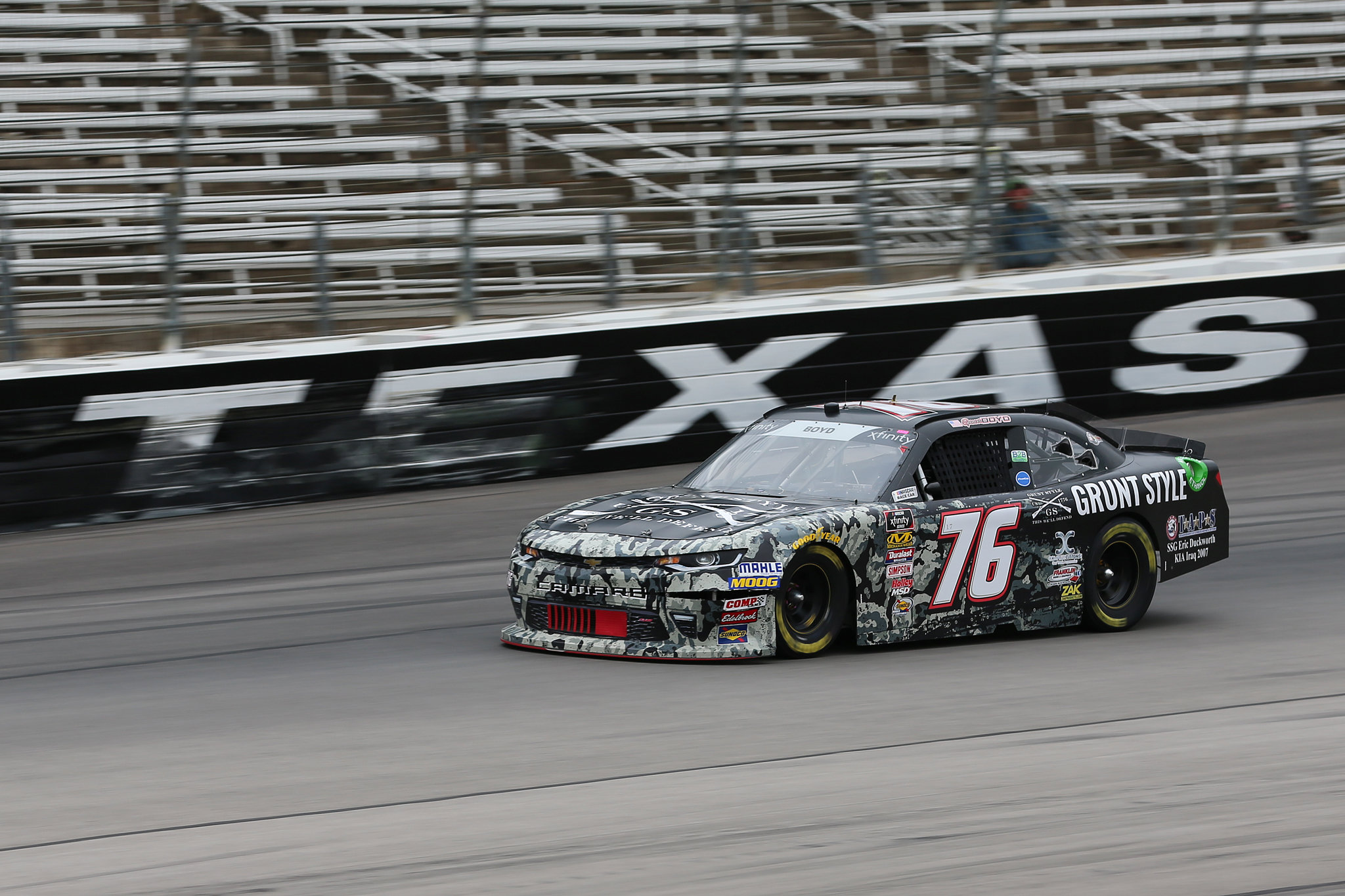 The NASCAR Xfinity Series returned racing this weekend at Texas Motor Speedway. After two off weekends, the drivers were ready for action and Texas absolutely delivered. The race was filled with attrition, which brought out several cautions throughout the race.
Boyd would roll off 28th for the 200 lap/ 300 mile event in the Lone Star state. It only took 3 laps for the first caution to come out as the 40 of Chad Finchum spun around. The yellow was displayed again for the 42 of Jamie McMurray spinning, as well as the 01 of Vinnie Miller making contact in the wall. Boyd battled a tight handling condition and received some damage to the nose of his Grunt Style Chevy in the first stage. Ryan Blaney went on to win the first stage with Boyd finishing P33.

The crew wasted no time fixing up the nose of the Grunt Style Chevy during the first pit stop of the day. Stage two produced even more attrition with the 23 of Spencer Gallagher spinning around. On lap 73 Boyd pitted under caution for 4 tires, fuel, & adjustments. On lap 80 caution was once again displayed as the 40 of Finchum took a vicious hit in the outside retaining wall. The second stage ended in a 1 lap shootout which Brandon Jones won, as Boyd made his way back up to 30th.

Boyd’s skills were tested yet again at the beginning of stage three, as he was forced to maneuver around the spinning cars of the 19 (Brandon Jones) 36 (Alex Labbe) and the 39 (Ryan Sieg) on the Texas front stretch. A combination of positive adjustments and excellent driving found Boyd up to the 26th position after all the carnage. A long green flag run finished out the the final stage of the race. Ryan Blaney picked up the checkered flag. Boyd rallied to a strong 25th place finish.

After the race Boyd reflected, “I’m really happy to get a solid run in today. There was a lot going on out there around us, so I’m happy we kept this Grunt Style chevy in one piece for the most part. We got a little bit of damage to the nose in the first stage, but my guys did a great job fixing it up. Today was definitely a step in the right direction. We have a great couple of tracks coming up the next several weeks, so we will keep building together and hopefully can produce some great finishes in the weeks to come.”

Boyd will remain in Texas to attend some sponsor events and meetings before making his way back to North Carolina. The NASCAR Xfinity Series will make its next stop at the “World’s Fastest Half- Mile” in Bristol, TN. Practice coverage will begin Friday with race coverage Saturday starting 1:00 PM E.T.