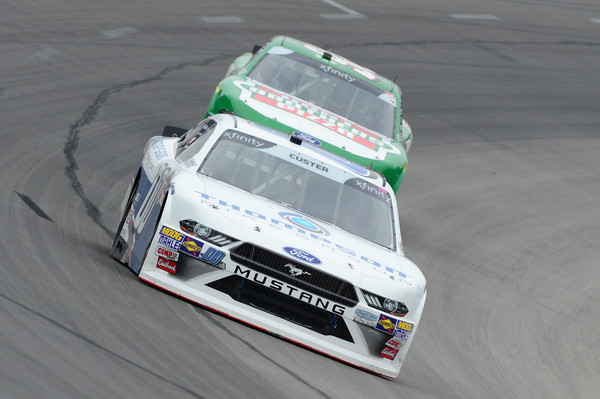 ● Custer piloted the Thompson Pipe Group Ford inside the top-10 for the majority of the stage.

● He noted tight-handling conditions throughout the stage.

● Custer pitted at the conclusion of the stage for four tires, fuel and air pressure adjustments. He gained five positions on pit road.

● Custer maintained his car inside the top-four until he was caught behind a loose-handling car on a lap-75 restart.

● During a lap-81 caution, Custer pitted for four tires and fuel along with the majority of the cars in the top-10. He restarted 17th.

● He continued to run inside the top-five, but noted tight-handling conditions during the first half of the stage.

● Crew chief Jeff Meendering radioed Custer to the pits on lap 142 for four tires and fuel. He was in the third position.

● After green-flag pit stops cycled through, Custer was scored in fourth place.

● Custer battled the Thompson Pipe Group Ford Mustang in the top-five for the remainder of the race and qualified for the $100,000 Dash 4 Cash bonus at Bristol (Tenn.) Motor Speedway next weekend.

● This was Custer’s third straight top-five at Texas.

● This was Custer’s best Xfinity Series finish at Texas.

● Custer earned four bonus points in the My Bariatric Solutions 300.

● Only 10 of the 40 cars entered into the race finished on the lead lap.

● The race featured eight cautions for a total of 42 laps.

● Ryan Blaney won the My Bariatric Solutions 300 to score his seventh career Xfinity Series victory, first of the season and first at Texas. His margin of victory over second-place Christopher Bell was 2.327 seconds.

Cole Custer, driver of the No. 00 Thompson Pipe Group Ford Mustang for Stewart-Haas Racing With Biagi-DenBeste:

“I was happy with our day. We were definitely a top-three car today. Our Thompson Pipe Group Mustang just ran solid all day. It is pretty amazing to be able to compete in the Dash 4 Cash prize at Bristol and it’s a really awesome thing that Xfinity does for the series. You get to race hard and race for a lot of money. We are going to get after it. We have been good there in the past and I’m looking forward to going there and try to win $100,000 for our team. That would be pretty awesome.”

The next event on the NASCAR Xfinity Series schedule is the Fitzgerald Glider Kits 300 on Saturday, April 14 at Bristol (Tenn.) Motor Speedway. The race starts at 1 p.m. EDT with live coverage provided by FS1.