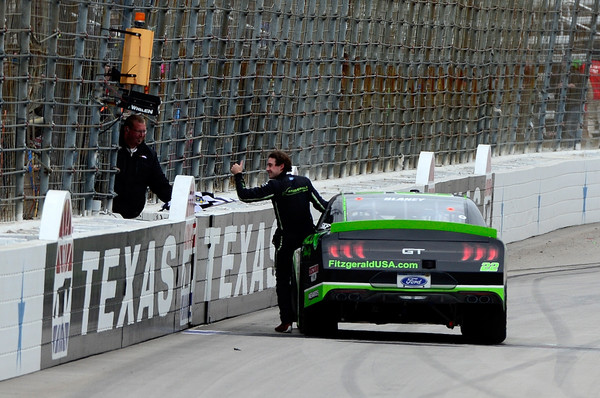 Finished: 1st — VICTORY LANE INTERVIEW — WAS THE ONLY SCARY MOMENT WHEN IT STEPPED OUT ON YOU ON THE RESTART? “Yeah. That was definitely the scary moment of the race. I can’t say enough about these guys. The Fitzgerald Glider Kits Mustang was amazing all weekend. We got behind a little bit on that restart. With the different strategies in the second stage we had to come from behind a little bit. The car was great and pit stops were great all day. I couldn’t ask more of this team. It’s finally nice to win one here in Texas.”

TALK ABOUT GIVING THE CHECKERED FLAG TO THE YOUNG FAN: “Whenever you can see them up close and personal and see how excited everyone is to be here it’s just bonus for us. That make us feel good. It makes us feel like we put on a really good show. I appreciate them sticking around. It was cold today for those watching and they stayed out there the whole race. It was unbelievable how many kids were in the stands and at the fence and really cheering and pumped up. Hopefully they had a great time. My main thing is trying to make a memory that lasts a lifetime.”

Finished: 4th — POST RACE PRESS CONFERENCE – YOU HAVE QUALIFIED FOR THE DASH FOR CASH NEXT WEEK, WHAT DOES IT MEAN TO BE ABLE TO RACE FOR THAT MONEY? “It is pretty amazing. To be able to compete, it is a really awesome thing that Xfinity does for the series. You get to race hard and race for a lot of money. We are going to get after it. It will be fun to go to Bristol. We have been good there in the past and I am looking forward to going there and try to win $100,000 for our team. That would be pretty awesome.”

CAN YOU TALK ABOUT BEING ABLE TO CATCH PREECE AT THE END? “Yeah, I think we were probably a third place car. I think we were a little better than the 21. Me and the 18 were pretty equal. It was just lap cars. That was the biggest thing. It is so hard because it is one groove and you don’t want to wreck yourself because you lose all your momentum when you take it easy. It is so hard to get around lap cars. That was the biggest thing about why I got around him.”

YOU HAD A ROCKY START TO THE SEASON BUT YOU ARE UP IN THE TOP-10 IN POINTS NOW. TALK ABOUT THAT TRANSITION: “Yeah, it has been pretty big. At the start of the year we had the speed, we just had bad luck with things going wrong and getting in wrecks and stuff like that. We have been able to clean that up and haven’t had the bad luck and have had fast cars. I think we just have to get a little bit better and just have a really smooth and have everything go right race. Hopefully we can have that next week.”

“I am glad to get back in the top-10. I think we had a car for the top-five but this place is kind of a track position game. We were able to race our way up to the top-five once or twice there in the race legitimately. I am proud of that. Proud of these guys on the 12 car. We never gave up all weekend. We got behind on adjustments in practice and made some good calls overnight. We didn’t really have the starting spot we wanted but we were able to rally from whatever position we were in. It is cool to have Mazak on the car this weekend. They have a lot of people out here this weekend and I am glad they were able to tough it out in the cold. I am looking forward to Bristol and the 22 car.”

“We had an up and down day for sure. Track position was so big. We had that one restart where we were up front and holding our own and then somebody got in our left rear and shoved us up the race track. Overall, I wanted to get a top-10 for sure but this is the best finish so far for the 60 and I feel like we are continuing to make gains every week. We will see what we can do next time.”

“I was really encouraged to start the race. It seemed like we right around the top-10 and had a fighting change today but we stayed out for some stage points and the end of the second stage and thankfully we got them because we lost all our track position and then we had a penalty on pit road that put us all the way to the back and that really cost us. There weren’t enough restarts at the end of the race to get it back. We had a fast Lilly Diabetes Ford Mustang but we have to be able to close these things out a little better because we are bringing fast race cars. We are close. We just have to clean things up a little bit everywhere.”