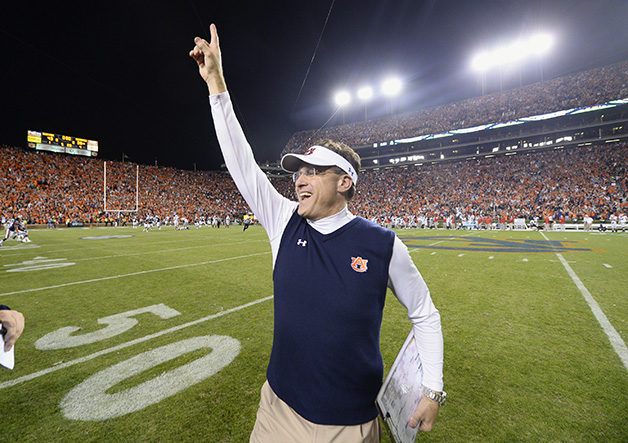 Auburn University Head Football Coach Gus Malzahn, one of the most innovative offensive minds in football, has been named as the Grand Marshal for Talladega Superspeedway’s GEICO 500 Sunday, April 29, and will give the command to fire engines prior to the GEICO 500 Monster Energy NASCAR Cup Series race.

The announcement comes a day after Malzahn welcomed driver Erik Jones, who pilots the No. 20 Toyota for Joe Gibbs, to the Auburn campus promoting the GEICO 500. Jones will attempt to give Gibbs, the former Washington Redskins head coach who won three Super Bowls, his fifth Talladega triumph in the GEICO 500. Malzahn and the Tigers will hold their annual spring A-Day Game this Saturday at 3 p.m. in Jordan-Hare Stadium.

“I’m really looking forward to being the Grand Marshal at Talladega,” said Malzahn, who was the Honorary Pace Car Driver at Talladega in 2014. “It was really exciting a few years ago driving the pace car. It was a great experience, gave me a great appreciation of the drivers and how fast they go. The crowd was unbelievable too, so I’m looking forward to getting back with that group, too.”

The GEICO 500 is part of a tripleheader motorsports weekend, which also includes the General Tire 200 ARCA Racing Series Presented by Menards race on Friday, April 27, and the Saturday, April 28 Sparks Energy 300 for the NASCAR Xfinity Series. For ticket information, call 855-518-RACE (7223) or visit www.talladegasuperspeedway.com.

Known for his hurry-up offense, Malzahn has guided the Tigers to a 45-22 record in five years that has also included a Southeastern Conference Championship and an appearance in the BCS National Championship game (2013). Last year, Auburn went 10-4 with victories over No. 2 Georgia and No. 1 Alabama during the final three weeks of the regular season.

The 2013 Bear Bryant, Bobby Bowden, Eddie Robinson, Home Depot, Sporting News, SB Nation, Liberty Mutual and Associated Press National Coach of the Year, Malzahn earned SEC Coach of the Year honors after guiding Auburn to the biggest turnaround in SEC history. Inheriting a team that didn’t win a game in the Southeastern Conference in 2012, Malzahn led the Tigers to a 12-2 record and the SEC title and a trip to the BCS Championship Game.

A native of Fort Smith, AR, he was the Tigers’ offensive coordinator from 2009-2011 in which Auburn won the National Title in 2010. He left Auburn to take the head coaching job at Arkansas State for the 2012 season, winning the Sun Belt Conference title, before coming back to Auburn to take the helm in 2013. He and his wife Kristi are the parents of two daughters – Kylie and Kenzie.

Coach Malzahn, who served as the track’s Honorary Pace Car Driver in spring of 2014, will be a part of pre-race festivities at the Driver Introductions Stage at the start-finish line. Fans can witness pre-race activities with a “Pre-Race Pit Pass Upgrade” for $75 (in addition to an admission ticket), which allows access to see Driver Introductions, be a part of the Fan Driver Q&A session, as well as stroll pit road and watch the competitors walk the Red Carpet into the Drivers meeting.

Experience the excitement as the superstars of NASCAR attempt to tackle the high-banks of ‘DEGA at 200 mph while enjoying the very best of southern hospitality. Ricky Stenhouse, Jr. is the defending champion of the GEICO 500.

AMS to recognize its most loyal fans with new concourse addition