Will Kimmel back on home turf … “doing the double” at Salem 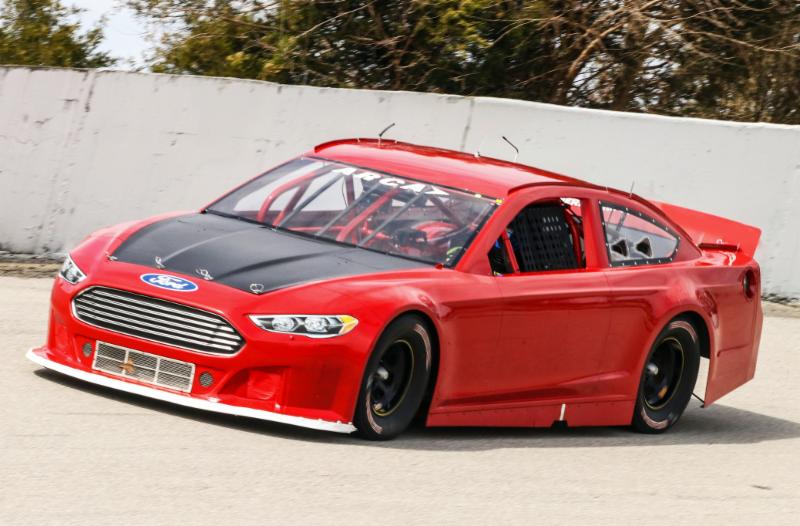 Will Kimmel’s Ford ARCA car will soon be dressed up  with all the appropriate stuff…the trademarked No. 69, all the FASS Diesel Fuel Systems and associate sponsor stickers, plus all the fender decals. In the meantime, the familiar Kimmel red backdrop was plenty good enough for the Clarksville, Indiana-based team, which spent last Saturday afternoon testing on familiar turf…their home track, Salem Speedway.
“Typical Salem,” said Kimmel. “After about five or six laps, you lose that new tire feel, and you get reminded real quick you’re at Salem.”
Of course being “at Salem” was never a problem for the Kimmels…the family name reaching back three generations at the storied, high-banked short track in southern Indiana. In fact, when Kimmel had to choose which seven ARCA races he could go full tilt at this year, both Salems were the first words out. Then came the two dirts (Springfield and DuQuoin), Gateway, Chicagoland and Kansas. But for the Kimmels, Salem will always be home.
“This place will always be special, for me, for dad, for this team. This is our Daytona.”
As important as Salem is, maybe that helps explain why the Kimmel Racing team is going back for one more test prior to the Kentuckiana Ford Dealers 200 coming Saturday and Sunday, April 21-22.
“We’re going to go back and spend a full day on it…change a few more small things. Cars back on the pull-down now. We’ve made a lot of updates on the car. It’s an older car…one that Frank (Kimmel) used to run. It used to be my primary intermediate car. But we’ve done some really nice updates to it to make it our primary short track car.
“We’ve tried some different things with set-ups. Last fall (at Salem) the car was pretty good but we missed some things on the set-up. Car just didn’t feel like it was on the racetrack. We’re a little better this last test. I don’t think the fall-off was as bad as it was, the that’s due to the improvements of this team.”
Kimmel will have his hands full at Salem, not only with one of the most competitive ARCA fields in recent memory, but the third-generation ARCA racer is planning to “do the double,” racing in the 50-lap Great American Stock Car feature just prior to the Kentuckiana Ford Dealers 200.
“I’ll be driving for dad in the street stocks. It’s actually an Allen Wellman-built car.” As far as the number, “it’ll be another mighty-fine 69.”… Kimmel red, of course.
Will Kimmel is a former Salem Speedway Super Late Model Track champion. He has a pair of career-best second-place ARCA finishes, one at Pocono and the other at Salem.
Past ARCA Racing Series winners at Salem include NASCAR Cup champions Bobby Allison and Benny Parsons, 1952 Indianapolis 500 winner Troy Ruttman, six-time ARCA champion Iggy Katona, Ken Schrader, 10-time ARCA champion Frank Kimmel (9-time Salem winner), and three-time series champions Jack Bowsher and Tim Steele. NASCAR drivers Justin Allgaier, Alex Bowman, Chris Buescher, Brennan Poole and Dalton Sargeant have also visited victory lane in ARCA competition at Salem. NASCAR Truck champion Christopher Bell swept both ARCA races at Salem in 2016. 2017 ARCA national champion Austin Theriault is the most recent Salem winner.
The Salem race also marks round 2 for the Sioux Chief Short Track Challenge, one of 11 short track events in 2018 that make up ARCA’s Short Track championship.
The Kentuckiana Ford Dealers 200 will spread out over two days, Saturday and Sunday, April 21-22. Practice is Saturday afternoon from 12 noon to 1:30, with General Tire Pole Qualifying following at 4. Kentuckiana Ford Dealers 200 raceday festivities get underway Sunday morning with an on-track driver autograph session at 11:30, followed by the Great American Stock feature event at 1. Pre-race ceremonies, ARCA driver introductions and the Kentuckiana Ford Dealers 200 follow. The ARCA race is scheduled to get the green flag at 2:15 Sunday afternoon.
For ticket info, visit SalemSpeedway.com
ARCA PR

Mark Smith Untouchable On Night 2 Of The Hockett/McMillin Memorial

McLaughlin Is Making Noise in His Return to “Thunder Valley”

Legends racers rip it up on AMS Thunder Ring in doubleheader