Erik Jones Was “Rollin’” at Auburn Thursday; Will Be Ready to “Roll” into Gatorade Victory Lane at Talladega Superspeedway, April 29 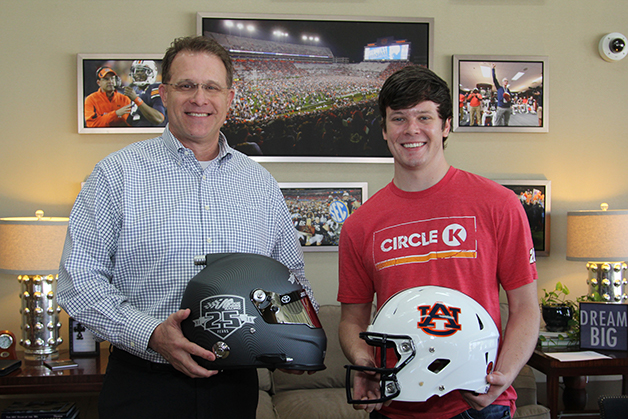 Rollin’ with NASCAR driver Erik Jones took on a new meaning Thursday at Auburn University, and it could define his actions when he comes back to the state of Alabama for the GEICO 500 at Talladega Superspeedway on Sunday, April 29.

Growing up in Michigan, Jones says he never really knew about the Auburn tradition of the tossing rolls of toilet paper in trees at Toomer’s Corner after a big sports win. Well, that has changed, and that practice could be implemented soon at another iconic location – Talladega’s Gatorade Victory Lane.

“Toomer’s Corner was so cool – what a tradition!” said Jones, the 2017 NASCAR Rookie of the Year who currently sits 12th in this year’s title standings. “I tossed a few rolls there today to see what it felt like….sorta gives you a feeling of freedom, and there’s no better feeling than winning. Your team and all your supporters are happy. Who knows, if I can come back and ‘roll’ into Victory Lane at Talladega in a few weeks, we may have toilet paper ready for some more rollin’ and celebrating.”

Jones made the journey to Auburn, just a couple of hours south from NASCAR’s Most Competitive track, to learn about everything Auburn, including the “War Eagle” battle cry, and to visit with students as well as Auburn head football coach Gus Malzahn, who is an expert when it comes to speed with his famous hurry-up offense. Of course, Jones knows a little about football, too, growing up a Michigan Wolverines fan, and, oh yes, he drives for former three-time Super Bowl winning coach Joe Gibbs, the owner of Joe Gibbs Racing (JGR).

“I met so many nice people today here in Auburn” said Jones, who is searching for his first career triumph. “Coach Malzahn knows football, and it was great to talk to him about the similarities between his sport and ours. Auburn football has a winning history, and the team is coming off a great year where it beat both Alabama and Georgia which played in the College Football Playoff National Championship game. JGR has a great history as well with championships and with victories, four of which that came at Talladega. We certainly hope to add our name to the Talladega list.”

Bobby Labonte (1998), Kyle Busch (2008), Tony Stewart (2008) and Denny Hamlin (2014) have taken JGR machines to victories at Talladega. If he doesn’t win prior to coming to Talladega, Jones could become the 12th driver in history to claim his first career triumph at Talladega, like Ricky Stenhouse, Jr. did a year ago in the GEICO 500.

Jones met with Malzahn, one of the most innovative offensive minds in football, in his office and the two exchanged helmets before going on the practice field. Jones tossed a football with former Auburn center Cole Cubelic, now a noted sportscaster for ESPN and the SEC Network, and WJOX Radio (BHM). Jones was then greeted by University President Steven Leath and a host of assistant Tigers’ coaches, including Tim Horton (Running Backs), Ryan Russell (Strength & Conditioning) and Kevin Steele (Defensive Coordinator), who is an avid NASCAR fan.

Jones educated students on Talladega’s $24 College Student Ticket Offer (www.talladegasuperspeedway.com/college) that includes a college-only campground for tailgating; a grandstand ticket for the GEICO 500; access to the biggest party in NASCAR – the “Big One on the Blvd” – on Friday night; and admission to the traditional Saturday Night Infield Concert featuring Uncle Kracker and NASCAR favorite Tim Dugger.

Visit www.talladegasuperspeedway.com or call 855-518-RACE (7223) for all ticket information to experience the highly-anticipated tripleheader weekend, which also features the General Tire 200 for the ARCA Racing Series (Friday, April 27) and the Sparks Energy 300 for the NASCAR Xfinity Series (Saturday, April 28).